Situated among rosemary, sage and four types of blueberries, the south Seattle tea estate is very small. In fact, it currently covers only one square meter of land and contains just one tea bush! The bush, named "Leafer," is of unknown varietal and was purchased for just $12 at the classical Chinese garden in Portland, OR. I believe she is now about 5 years old. 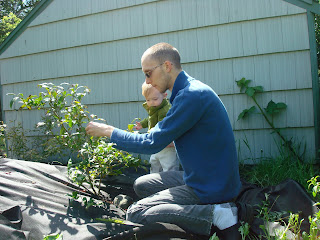 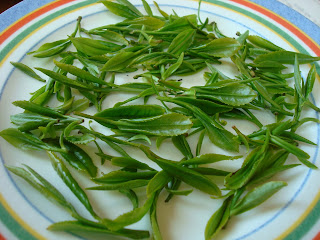 At 2:00 pm on May 11, 2009, I hand harvested a small batch of tender new leaf and bud sets. These leaves were then withered indoors for 5 hours before a few minutes of gentle hand rolling. After this rolling step it was oxidized overnight (about 9 hours).

After about three hours of withering
(taken as the sun is just starting to set): 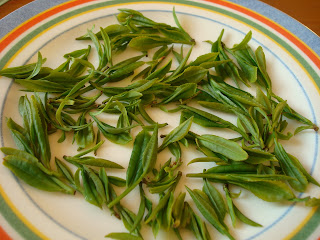 Withered about five hours
(taken as the sun has almost set): 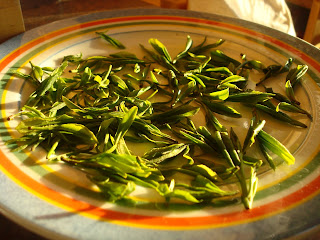 At 6:20 am, I examined my freshly baked tea. The long twisted leaves are a beautiful mix of jade green and reddish brown. It had a sugary-lilac fragrance throughout its withering phase, which it still has, but now it's less intense, with an added gentle toasty aroma. At this point the leaves have fully cooled so I've put them in a clay jar to wait until Thursday when I'll have time to drink them with my wife!

My finished tea
(taken during the soft grey light of Seattle dawn): 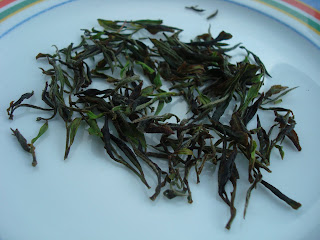 This is amazing! I had no idea the conditions were decent to grow in Seattle!

Wow! That is some exclusive tea! I don't recommend picking tea without covering your whole face with a scarf and bamboo hat though!

Wow. It's exciting to see people growing tea in the U.S. I've thought about attempting to grow it here in Delaware but I think that would be a bit of a stretch--although I know a spot where I think it might grow.

In a little garden nestled in between two wings of the main academic building of U. Delaware's agriculture school, protected on three sides and warmed by the heat of the building, people are successfully growing a Japanese blue oak, several species of palm, and a number of other plants from considerably warmer climates.