My friend's parents recently returned from Taiwan and... lucky me... I scored some Alishan High Mountain Tea (阿里山高山茶) as a belated Christmas present!

The gift came in a red and gold bag with a beautiful crane and white flowers printed on it. The Chinese words on the bag claim this tea is: "Gold Ranking Collectable Tea" (黃金般的茶臻藏) and "Emperor Worthy Tea" (皇帝般的茶饗). The brand appears to be "金藏茶宴."

Lets see if the contents are truly "Emperor Worthy!"

The dry leaves look and smell amazing. They are large, loosely rolled, and possessing of fat long stems. My mouth begins to water. 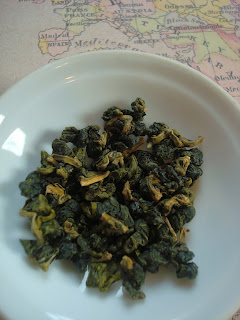 This is an incredible tea in my opinion. The flavor transports me right back to Alishan. The tea soup is so fragrant with notes of orange zest, honeysuckle and cinnamon bark. The mouth-feel is thick with delightful syrupy and sparkly elements. The tea continued its greatness throughout 12 infusions and the aftertaste was clean, brisk and long-lasting. The spent leaves and thick soft stems radiate health and vitality. The tea left me feeling alert, creative and comfortable. Ahh. There can be no doubt I love good high mountain oolong. 謝謝 Janice and Mo! 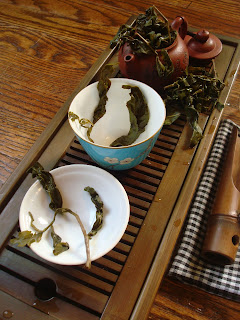 Seattle based, PCC Natural Markets, Portland based The Jasmine Pearl, and Sakuma Brothers Farm recently teamed up to offer PCC customers unique herb and tea blends made entirely out of local ingredients. PCC broke this news to their members last month with an article called "taken with tea."

This morning, while browsing the bulk teas at PCC, I saw these new blends for sale and decided to purchase a small amount to review here on my tea blog. I went with the white tea based blend which also contains blackberry leaf, nettle, lemon balm and lavender. 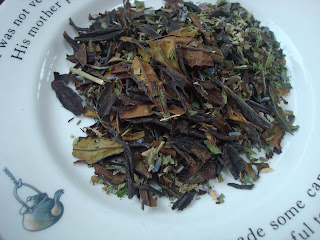 The dry leaf smells like lavender with some sweet grass, and wood notes. I used a heaping teaspoon of dry leaf, 8 ounces of 180° F water, and a medium Finum basket to infuse this blend. The resulting liquor was orange and fragrant.

I love supporting local food and herb producers and I've enjoyed my past encounters with Sakuma's unmixed tea but this blend is not for me. The tea feels healthy and restorative to drink but it is too sweet and I really do not like the lavender flavor.

As an enthusiastic drinker of pure tea, perhaps I was never the target demographic for this product. I would be much happier to just see unadulterated Sakuma Brother's tea leaves on sale at PCC. That said, I'm sure many folks will think this blend has a great flavor and hopefully these products are finding fans among PCC shoppers. The quality of the ingredients and the wonderful people behind their production and blending makes them a good way to "drink local."
Posted by Brett at 3:47 PM No comments:

It's a beautiful morning in central Taiwan. 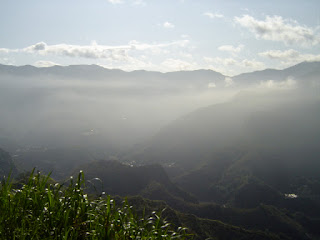 Will you join me for a high mountain stroll? 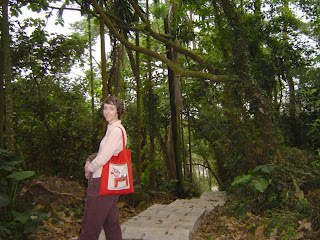 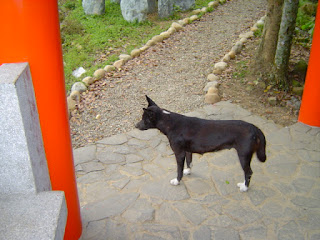 Alishan High Mountain Oolong farms off in the distance. 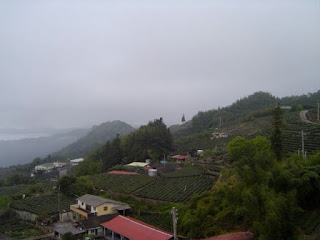 Here is a little roadside shrine... 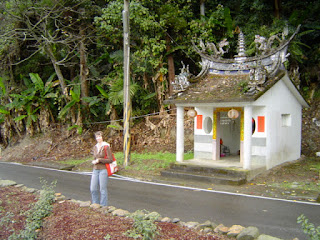 ...and across the street we find baby tea plants mulched with peanut shells. 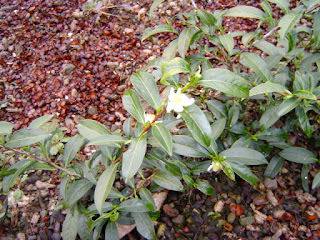 Wow. What kind of plant is this? 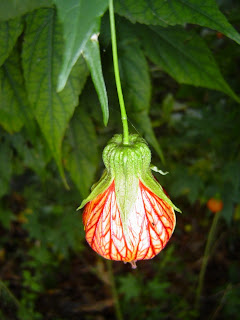 That tree is awesome and a little creepy.
It's starting to get late.
Lets head back to the homestay. 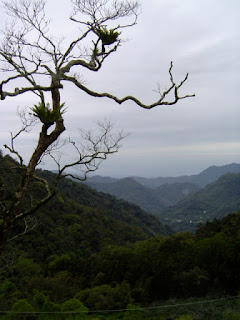 What a beautiful sunset tonight. 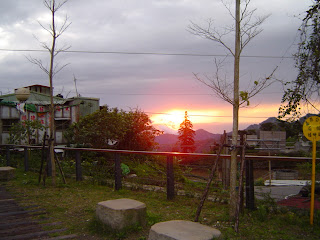 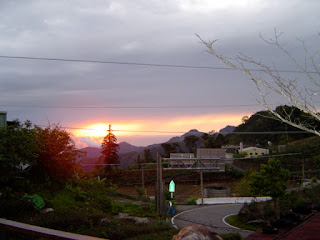 Back just in time! 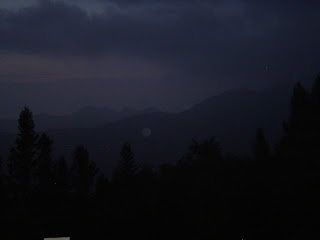 It's not too late for one more pot of tea. 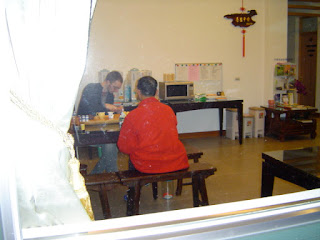 The perfect end to a great day! 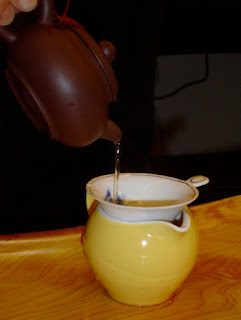 I recently cupped two Dianhong (滇紅) black teas that are currently available at Cinnabar's and my tea shop, Phoenix Tea. One is called Golden Dianhong and the other Dianhong Needles. Both of them were produced at the Fengqing (鳳慶) Tea factory, a nearly 75 year old operation, in Lincang (臨滄) region of Yunnan, China. These leaves were grown at an altitude of 6000 feet and are of the "big leaf" (da ye) (大葉) variety.

I have had many great solo sessions with these two teas in the past but I had never tried them together. My hope is to learn more about how they differ. 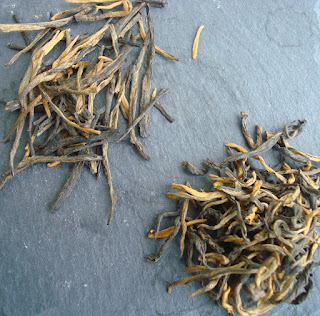 I steeped 2 grams of each tea in two identical ceramic tea cupping sets for 5 minutes. After decanting the tea soup it was very hard to tell them apart. They both had a lovely red color and sweet, alluring aroma. In this photo the Golden Dianhong is on the top and the Dianhong Needles is on the bottom. 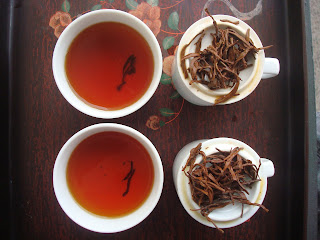 I took my time sipping back and forth and came up with a few subtle differences. Golden is a little stronger, sweeter, and maltier while Needles is brisker. Needles has a tiny bit more smokiness and a complex "wild side" with note of pinewood, dried fruit, and nuts. Golden has a creamier, thicker mouth-feel. Both are very smooth, satisfying black teas with loads of wonderful dark chocolate flavors.

This cupping left me with a comfortable, happy tea-buzz and a major chocolate craving.
Posted by Brett at 3:14 PM 1 comment:

Māmaki is a small tree in the nettle family endemic to Hawaii. Native Hawaiians have used the plant's leaves and fruits as food and medicine for hundreds of years. The bark is also used to make cloth and rope.

For Christmas, my mother-in-law gave me a 0.55 ounce bag of dried māmaki leaves for use as a tisane. The recommended parameters printed on the package are: "Steep 1 teaspoon (1 - 2 leaves) in a cup of boiled water for 5 minutes, strain and resteep up to 3 times." I selected two large leaves and did just that. 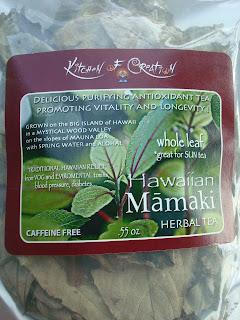 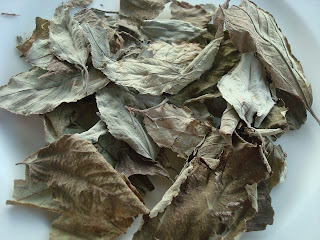 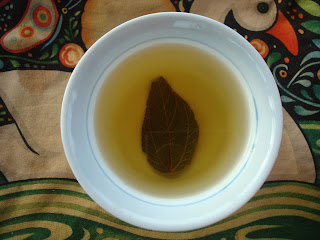 This herb has a unique flavor. It is earthy, citrusy and grassy. I pick up notes of dandelions, rich black soil, bancha green tea, and metallic canned green beans. The aftertaste is where most of the citrus flavors linger. It almost reminded me of a somewhat earthy and musty Alishan high mountain oolong. Not bad.
Posted by Brett at 2:19 PM 1 comment: