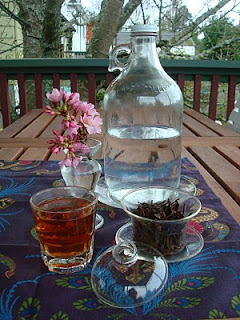 On Saturday I purchased this 100-gram puer tea brick from fellow Seattleite Jeffrey McIntosh. Jeffrey recently returned from Kunming, China, where he spent several months intensively studying all aspects of puer tea. He has a very good relationship with Denong (德農) Tea Company and imported these bricks himself. Lucky for us, he is now selling top quality puer teas to North American Chinese tea lovers like me! 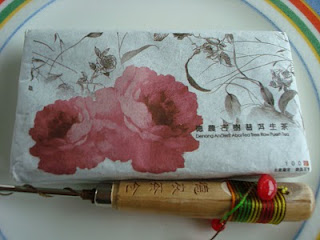 On first sight, the wrapper looked familiar to me. I now remember having tried a couple of very nice Denong bricks a few years back. Those bricks were from Bana Tea Company and had similar size and floral paper design.

I also found it interesting that, besides the brick's Chinese name (德農古樹普洱生茶), the wrapper is entirely in English. Perhaps the producers fully intended this one for export?

This brick was marketed as very smooth, and very clean and natural. The wrapper even includes a certification sticker from SGS Taiwan to back up the seller's (in this case Jeffrey's) claim that there is zero pollution, pesticides, or other residues (i.e. bad stuff) in these leaves.
Sure looks good to me! 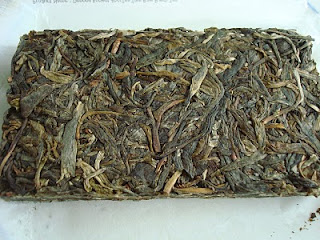 My wife and I spent some time getting to know this brick on 3/13/11 after we finished our Sunday gardening.

I used my ~100 ml gaiwan with about 5 grams of dry leaf and boiling water. A three second rinse opened the session nicely with a wonderful fruit and herb aroma. It was hard to describe the scent, but I'd say it had a hint of strawberry.

I pushed the leaves through 9 satisfying infusions and, as advertised, found no bitterness. The soup had a great amber color and good throat-feel but it lacked slightly in the mouth. The wet leaves always smelled so good but were elusive in the cup. 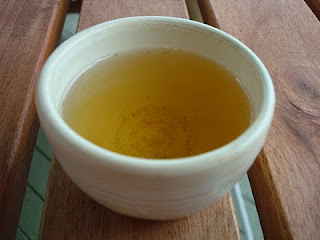 I found many things to like about this brick. It had moments of great complexity yielding snap pea, rosemary, bay and straw flavors. It also delivered a syrupy eighth pour that coated my mouth nicely. 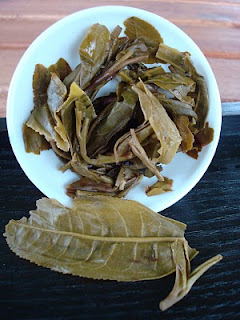 Although I have had other sheng puer teas that I have liked just as much or more for the same price, I am still very pleased with my investment. This pretty little tea brick left me feeling light, clean and refreshed and I look forward to many future sessions.
Posted by Brett at 6:17 AM 4 comments:

I recently had the great honor of tasting a rare and organic Taiwanese hong cha (紅茶) (red tea, aka black tea) made from the Jin Xuen (金萱) cultivar, and imported by the amazing Josephine Pan.

Josephine said the tea was produced in the Summer of 2010 in Nantou county. The locals call it simply "Mr. Chen's Organic Red Tea," but Josephine, at least for now, calls it Formosa Bonita. 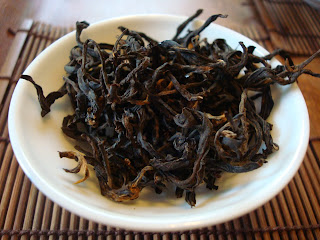 I brewed this tea in a small gaiwan ~1/3 full of dry leaf. I used boiling water and started with a one minute infusion. Gradually increasing to 7 minutes for my 5th and final infusion.
It smells as good as it looks. 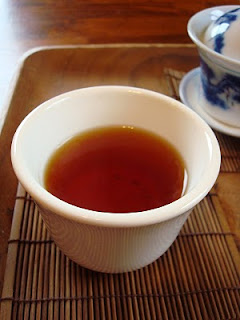 I really love this tea. It is bold and aromatic with a round, smooth mouth-feel. My tasting notes include caramel, malt, Assam black tea, toasted almonds, and chicory. The aroma under the gaiwan lid is sweeter and fruitier with a hint of cherry cider. 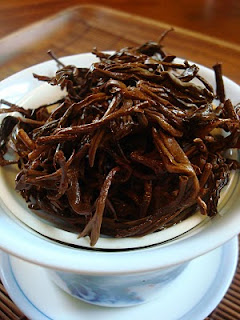 Josephine told me that the farmer is sold-out of this batch and that she only has a little bit left... so I bought myself a kilogram. I'd happily sell some (at $8 US per ounce) if anybody else wants to try it. Just email me at blackdragontea@gmail.com
Posted by Brett at 4:33 AM 6 comments:

My friend Chris, a talented local potter, organized this show for regional artists to display their tea related work. Unfortunately I wont be able to attend the opening and tea tasting on March 27th, but I'm certainly going to try to make it over to the gallery before April 9th.

Here is their postcard for more details: 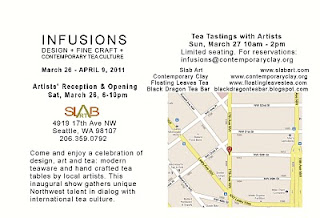 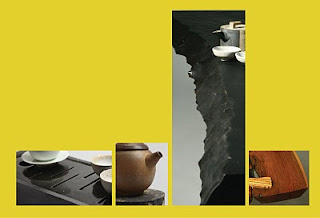 Exactly ten years ago (just days after the Nisqually earthquake) my then-girlfriend-now-wife Alanna and I loaded up our cars and headed north to Seattle. She was transferring to UW from UNR and I was excited about landing a vegetarian cooking job and making music in one of my favorite cities. We were both 19 years old. 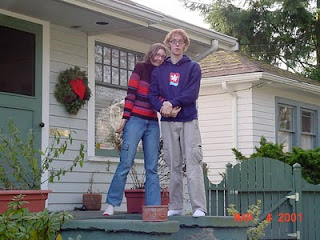 We broke the drive up into two days, spending the night with friends of my wife's family in White Salmon, WA. The following day we rolled in to Seattle and made our way to my uncle's house on Queen Anne Hill. We moved ourselves into his half-finished basement.

During the next 6 months, Alanna started school and I looked for work. I did cook at a few places but never got any real momentum. My favorite memories from these months are of playing "house boy." Nearly every weekday, after I did some chores, I would explore new parts of the city before buying groceries and then coming home to prepare a big vegan dinner.

Unfortunately, after six wonderful months I ran out of money.

Alanna and I wanted to get our own place so I ramped up my job search. In October, fate smiled on me as I noticed a small help wanted sign in the window of the Teacup. I think Brian Keating (then owner) and Donna Fellman (then manager) decided to hire me because I had a small amount of cafe experience and great availability.

One thing I did not have was tea knowledge.

I liked to experiment with my tea and was often drinking my own blend of 40% Keemun, 40% White Peony and 10% Yerba Mate which I called "Liquid Love." I also added soymilk and sugar to more teas than I now care to mention.

In those days it seemed like Phoenix Dragon Pearls and Keemun Hao Ya A were the "be all end all" of Chinese tea at our little store. We also sold small amounts of several oolongs, one loose-leaf shu puer and one white tea which I'd say was pretty good for 2001. The sale of strong black tea, scented tea and herbal tea has always been of greatest importance to Teacup and I've always been proud selling many types of tea to many different people.

My greatest joy during this period was learning more about tea and tea business from my new mentors Donna and Brian. They guided me through the basics of tea with daily cupping sessions and pointed me towards numerous resources to help cultivate my own budding tea career.

My first truly inspiring tea session was when Donna brought in some of her own Tie Guanyin oolong and introduced me to gong fu style tea preparation. My second was an introduction to Darjeeling tea, which included a Darjeeling green and oolong, all imported by Brian from the biodynamic Ambootia tea estate.

My third most memorable early tea experience actually occurred in Spring of 2002 when Brian partnered with Teahouse Kuanyin to import a couple 600 gram cans of a prize winning Wenshan Baozhong. We sold that tea for $10 per ounce... seems like a good price now... but back in 2002 we all thought that it was the most expensive tea possible. How the times have changed, eh? Needless to say, I thought it was amazing and I couldn't help falling in love with Taiwanese tea.

This last decade has been an awesome ride. I'm sure my thirties will be too... and like most bloggers, you can bet I'll keep writing all about it.
Posted by Brett at 5:04 PM 4 comments:

Saturday, March 12, 2011 - 10:00 to 11:00 AM
Taiwan Tea Art - In this class I will prepare many infusions of two rare and delectable Taiwanese teas using my finest teapots and cups. Participants will get tips on gong-fu style tea preparation while we sip together, mindfully and meditatively. 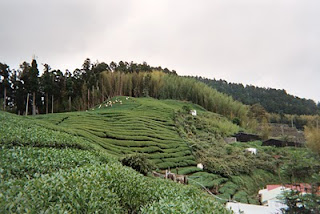 This photo was taken by my buddy Darald.
(Can you tell that it is the very same tea pickers
seen from a different angle as on my blog's banner photo?)
My tea classes are great for tea lovers of all levels, so feel free to bring a friend or family member that you'd like to "get hooked" on tea. The cost is $3 per guest and a RSVP is required. You may RSVP anytime by visiting or calling the Teacup (206-283-5931) or by emailing me at blackdragontea@gmail.com.

I will let you know as new classes are scheduled, and please feel free to suggest a class idea on a subject you'd like to learn more about. I hope to see you soon at a class!
Posted by Brett at 12:45 AM No comments: