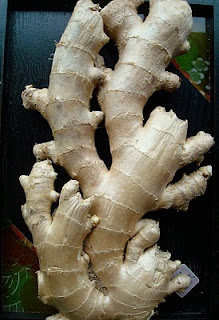 Here in Seattle we have many peaceful urban critters who will keep us company as we sip tea outdoors. While most of them are bugs, we do get the occasional mammalian visitor as well.

So now, Ladies and Gentlemen, please allow me to present a short gallery of "Wild Things" for your viewing pleasure! 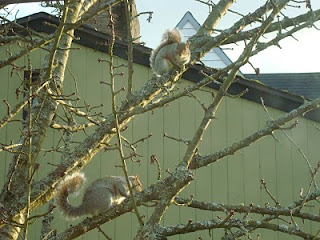 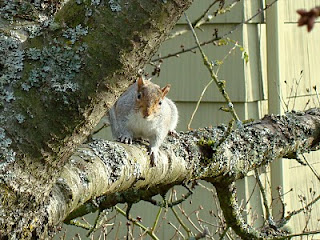 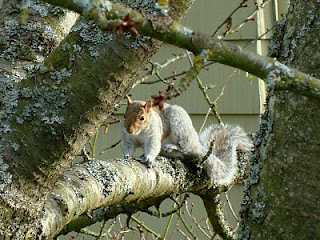 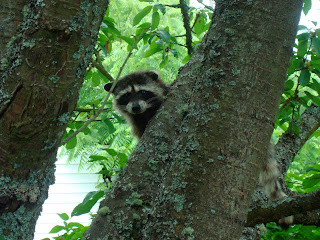 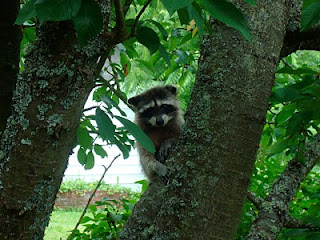 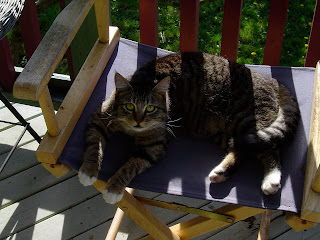 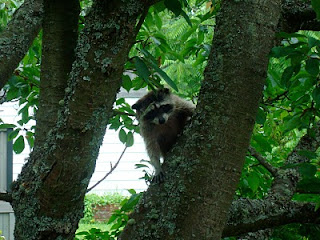 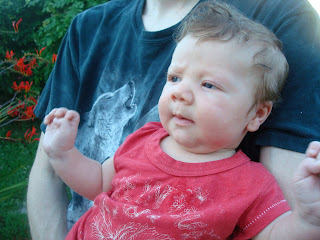 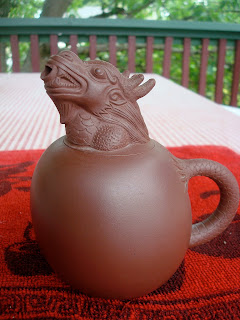 Material: Unglazed Red Clay
Height: 12.5 cm
Length (handle to spout): 12 cm
Volume: 275 ml
Brews: Puer Tea
Specialty: Loose leaf ripe puer tea.
Story: I purchased Funny Guy nine years ago at Teacup and he is my first official "puer pot." He was imported by CCCI so he is "nice but not too nice" plus he didn't cost too much. Interestingly, Funny Guy's head is also his lid and the tea flows right through his mouth... so you have to hold on to his head while pouring or else it will just fall off!
Super Powers: Funny Guy can fully twist his head around in circles preventing any bad guys from sneaking up on him. He can also use this power to pull off an amusing "Exorcist" style party trick!
Posted by Brett at 12:54 PM No comments:

A Message from the Guguan Tourism Board

Guguan (谷關) is a hotspring (溫泉) resort village located in Taichung county, Taiwan (台中縣, 台灣). Every year, this peaceful little town attracts thousands of hotspring-loving tourists from all over the world. But even with all of those visitors, you can still find some pretty posh places to soak your bones without spending a lot of money. In the last five years, I have enjoyed two very relaxing overnight visits to Guguan, and each time I've only spent about US $50 (including all meals and lodging). 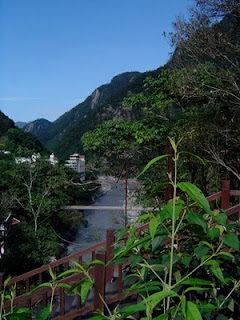 The town clings to two sides of a deep ravine that have been stitched together by a few rad suspension bridges. Resort hotels are all over the place. Don't stay at them unless you have a few hundred dollars budgeted... but do hit them up for a good soak. Some resorts, like the Four Seasons Spa Hotel, will open their pools to non-guests for around $10 to $20 depending on the time of year. But if that's still too steep... you can also find some wonderful pools in the $5 range.

I really love the Chinese verb "pao" (泡) meaning "to steep" (as in tea leaves). It is the same word used for soaking one's self in a hotspring. So if you would like to have a dip, just say "wǒ yào pào wēnquán (我要泡溫泉)." Which means: "I would like to steep myself in the hotspring."

Here is one of several pools in which I've soaked: 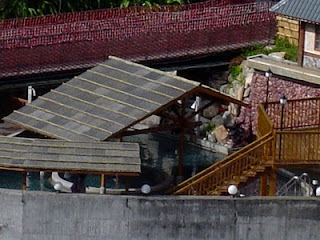 The tea scene in Guguan is decent... there are a few little cafes that serve good tea, fresh juice and snacks to the health-conscious visitors. But the best tea in Guguan can be for found for free in the parks and pagodas. If you see some folks sitting in the shade and relaxing with a portable stove and teapot go right up to them and say "nihao" (你好). Tea lovers from any culture love to meet one another, so ask them what type of tea they are drinking and if you can taste a little bit. Chances are they will share a little and you'll spend all afternoon sipping oolong and chatting. 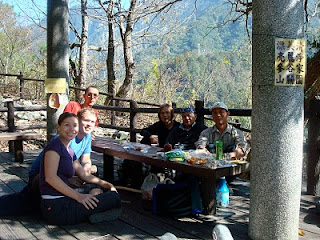 The trails around town are very beautiful and offer some short, rewarding hikes. As you power your way up a flight of stairs to the next scenic look-out you may hear some other hikers yell "jia you" (加油) as they huff and puff. This literally means "add oil" but is often translated as "step on the gas" or "make more of an effort." 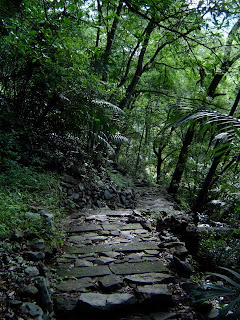 In addition to the many beautiful hotsprings and hiking trails around Guguan, the travel map that I picked up for free in the hotspring museum (also free) stated the following: "There are other natural wonders in the Guguan Scenic Area as well--a thousand year old sacred Chinese white pine tree and a Pig of Destiny."

On August 8, 2007, I first did a comparison style "cupping" of my 2006 Gold Medal Long Yuan Hao Puer Cake (金級龍園號普洱餅茶) and Tuo-cha (沱茶) for my MySpace tea blog (does anybody still remember MySpace?). Almost a year later, when I started this blog, I reposted it (linked here), and at the end of that post I stated my intention of recupping these teas together every 3 years... and now here we are, late July 2010! Boy, how time flies!

During the last three years, these two sheng puer teas (生普洱茶) have been waiting on my puer shelf behind a curtain in my bedroom. I haven't drunk either of them since 8-8-07 and I did not read the original post prior to today's cupping so that it would not influence my taste buds.

I am now aware that these two teas are not exactly the same leaves pressed into two different shapes (as I had assumed back in 2007). The tuo-cha has the name Banna Tai Zi (Banna Prince) (版納太子) and the cake has the name Banna Yin Xiang (Banna Impression) (版納印象). Their vintage (2006), factory (Long Yuan Hao), and origin (Banna, Yunnan, China) may all be the same, but they are definitely two different teas. 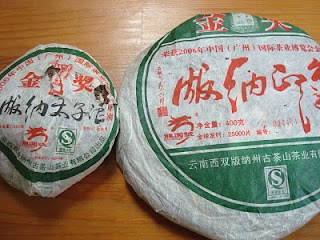 The dry leaf on the Tuo seemed to be a bit smaller with a few more silvery leaves than the Bing (cake). This may be partially due to the leaf compression on the Tuo, which was considerably tighter.
Mr. Tuo 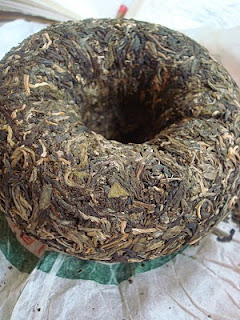 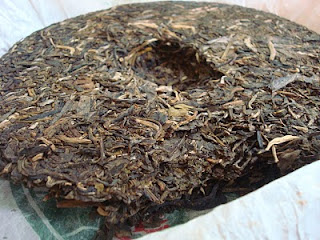 I used 5 grams of leaf in a bowl with about 8 ounces of boiling water (this being roughly the same cupping method that I used three years ago). I then reinfused the leaves five times, while constantly stirring and smelling the broth with identical ceramic spoons. My wife joined me halfway through (just as she did three years ago) to offer her opinion. As I type this post, I am drinking the cold liquor of both teas which have now been steeping for several hours.
The stage is set. 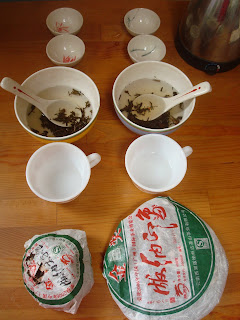 The aroma of the Bing was consistently maltier, smokier and rounder than the Tuo's which came through as brighter, pine-needle-y, and kind of "fruity and hoppy" like a light fizzy beer. Of interest to me was the evolution of the Bing's aroma over time into a more savory, soupy and sometimes unpleasantly tobacco-like smell. The Tuo, on the other hand, always seemed to have a sweet, crisp and playful smell regardless of steeping time.

The Bing was sweeter on the tongue with a hint of cacao flavor and a finish like charcoal baked oolong. The Tuo was more susceptible to bitterness and even reminded me of over-steeped Dragonwell green tea at one point. That being said, I slightly preferred the Tuo this time around, because now that both teas are cold, the Tuo is still clean and refreshing while the Bing is swampy and tobacco-y.

These teas have both changed quite a bit since my 8-8-07 cupping and I would no longer say that these puer cakes are "both superb." They are very good and I'm happy to have them around... but other sheng puer teas have impressed me more in the last couple years.

During my average work day at Teacup, I see business meetings, clubs, dates, and friends all gathering to make plans or just to chat. I have also noticed many lasting friendships develop between total strangers while they sat in close proximity drinking good tea. Those of us who work in tea houses know that they are the world's "original social networking sites" and we truly love the vibrant mix of people and personalities that pass through our doors.

Besides serving great tea, a good tea house should meet the needs of of its patrons. Some are looking for a quiet comfortable place to relax, read or write, while others are looking for a festive place to socialize. A selection of food, either full meals, or just small simple snacks and/or treats, is also important for keeping guests comfortable while they visit. Occasional entertainment, such as art, opera, storytelling, calligraphy, music, classes, acrobats, or board games are also big plus!

When I started selling tea 9 years ago, I almost never saw a laptop on any tables at Teacup. But these days more than half of our clients are using a laptop or a smart phone (or both at the same time) while they sip their tea. I don't mind because this is the cafe culture here in Seattle. We are all adapting to life in 2010 and I still see many new friendships being made, businesses, weddings, and other grand events being planned, and families and friends of all races, gathering together to talk.

Wherever you may be on our beautiful little planet, I hope you have a great tea house close by!
Posted by Brett at 2:05 PM 3 comments:

Tea has inspired countless poems throughout its long history. Here are two of my very favorite tea poems, both composed by my beautiful and talented wife Alanna. 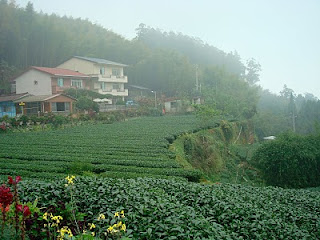 - Morning Tea -
The steaming water falls into my china cup.
The leaves inside will dance as the water wakes them up. 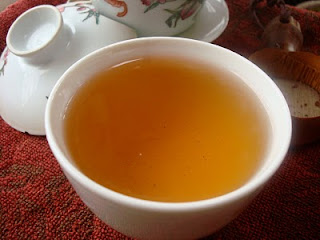 Please feel free to add your own favorite tea poems (or links to them) in the comments section.
Posted by Brett at 5:26 AM 2 comments:

My tea friend Ian recently surprised me with this awesome drawing of a tea dragon kicking back with a steaming hot cup of oolong tea. I liked it so much, I thought I'd share it with all of you. 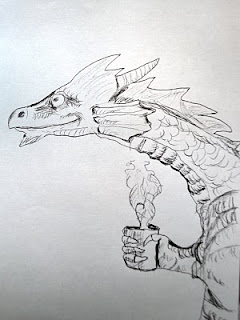 Email ThisBlogThis!Share to TwitterShare to FacebookShare to Pinterest
Labels: randomness

July 22, 2010 - 7:00 to 8:00 pm
Making Great Iced Tea - In this class we'll learn about iced tea brewing, find some teas and herbs that are amazing iced, and look at several different ways to brew excellent and healthy iced tea. 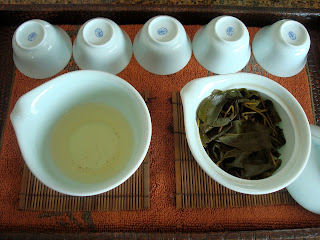 These evening classes cost $3 per guest and require a RSVP. It's sometimes OK to RSVP even on the same day. You may RSVP anytime by visiting or calling the Teacup (206-283-5931) or by emailing me at blackdragontea@gmail.com. I will let you know as new classes are scheduled, and please feel free to suggest a class idea on a subject you'd like to learn more about. I hope to see you soon at a class!
Posted by Brett at 4:13 AM 1 comment: