On May 8, 2006, during my second trip to Taiwan, my friend Shiuwen treated my buddy Darald and me to an unforgettable tea tour. We met up with her bright and early in Taipei and had a hearty breakfast of steamed vegetable buns, fried youtiao and fresh soymilk. After our meal, and after we took care of a few errands (including sending my mom a Mother's Day card), we proceeded via metro to Xindian station, which is where we got the bus up to Pinglin.

It was a very hot day in Taipei and the air was barely moving but once we got off the bus in Pinglin we were soothed by a lower temperature and a gentle breeze. The air in Pinglin is sweet and the surrounding hills are lush and green. Our first stop in town was Shiuwen's friend Farmer Chen's tea shop where we drank some unforgettable Wenshan Baozhong tea. After tea we had a satisfying lunch of tea oil noodles (a local specialty), fried tofu, and soup with lotus flowers.

After lunch, we headed up to Farmer Chen's tea farm by car. Once at the farm I was excited to learn that we would be able to pick tea leaves. Darald and I were shown the basic technique, given a hat and basket, and put to work. In one hour I had plucked less than one tenth of the tea the locals had harvested. I watched as their hands moved quickly and skillfully over the tea bushes while my hands brought to mind those of an intoxicated sloth. I was still given a pat on the back and told that I didn't do too bad for my first try. It was a wonderful experience that left me with even greater respect and appreciation for the professionals. 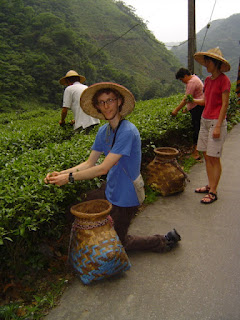 After tea picking time we spread our leaves on rattan trays to wither... 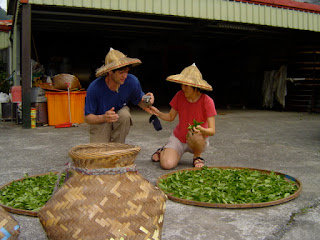 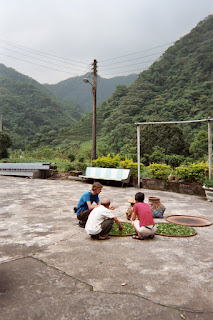 ...then we walked over to the neighbor's farm to see Dong Fang Mei Ren (東方美人) oolong tea in various stages of production. 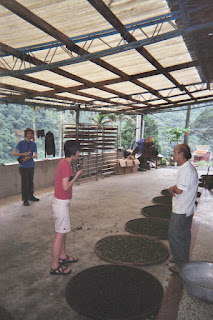 As we walked around the misty, green farms, Chen and Shiuwen pointed out the different cultivars of tea bushes we passed. Qing Xin (青心) was the most common, but Jin Xuan (金萱), Fo Shou (佛手) and even Wuyi Mountain Shui Xian (水仙) tea bushes were planted in this area. 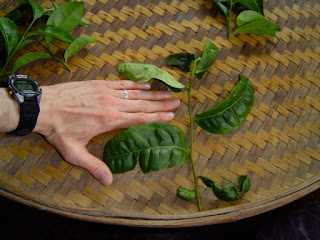 We drank some more fresh tea and then traveled back to town. Shiuwen, Darald and I visited a large facility for de-stemming and sorting hundreds of pounds of Wenshan Baozhong tea. It was fascinating. 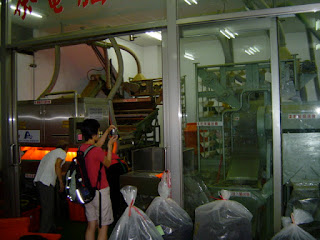 We stopped into another tea shop where I purchased some baked Baozhong for Teacup (the store I was managing at the time), and two clay teapots (for myself). I also took a small shot of Baozhong wine offered to me by some locals. It was strong stuff.

In the evening we said goodbye to Pinglin and hopped aboard a bus headed back to Taipei. The ride was somewhat eventful because an air conditioning unit was leaking water all over one vinyl seat. About halfway to Taipei the bus was full except for that seat. An old lady came in with two plastic bags. She looked all around for a seat and was dismayed by her only option being soggy. I was close by so I sprung up to offer my seat. She tried to protest but I insisted and she sat down while I stood. Then she gave me a present. It was a special local food. Some type of gummy rice pocket with a bright, artificial-red, raw-onion-tasting filling. I thanked her and ate a little bit. I gave the old lady a smile and a big thumbs up... but I really didn't like it, so I put it in my pocket to deal with later.

The evening in Taipei was not too hot and we all had a great dinner at a Buddhist buffet. Then we headed over to Shiuwen's friend Lao Ji Zi's shop for even more great tea.

(That's our own fresh picked Baozhong leaves on the tray.) 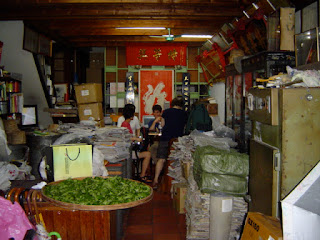 Although we were already quite tea drunk we made room for some more amazing tea. I had an Alishan High Mountian Oolong that was so incredible. It was the type of tea that makes a tea-person empty out their wallet and say, "How much will this get me?"

We also cupped up the Baozhong leaves that we picked that afternoon. By this point they had only been withered slightly and jostled about in our bags during the commute back to town. They had a subtle sweet floral aroma and clean clear broth with notes of lilac and dew. A very refreshing way to end the night.


(Those are our jade green leaves in the large bowl.) 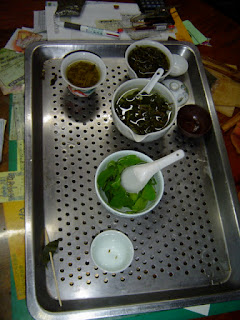 All in all it was a wonderful day in Northern Taiwan. I can never thank Shiuwen enough!
Posted by Brett at 6:42 AM No comments: