The first time I cupped these two together was way back in August 2007, the second was July 2010 and the third is today! When they're not being brewed, these two sheng puer teas (生普洱茶) live on my puer shelf (located in the corner of my bedroom behind a curtain). I haven't brewed either of them since 2010 and I did not reread my two previous posts prior to writing this post so that they would not influence my taste buds. 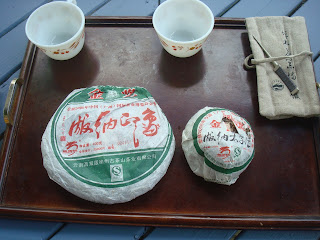 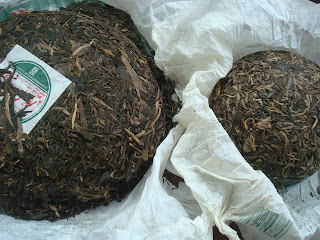 The cake is on the left and the tuocha is on the right. 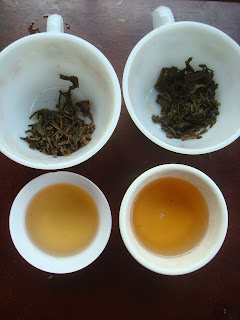 I brewed these teas in two identical 6 ounce glass mugs using boiling water, 3 grams of dry leaf per tea, and ceramic soup spoons to ladle the liquor into drinking cups.

The color of the tea soup was yellowish-orange with a little more red and amber in later infusions. The aroma was sweet and woodsy with a hint of pleasant smokiness.

I'm really enjoying both of these teas and I don't remember being this impressed 3 years ago. Also, for some reason, they are tasting very similar to me today. Both are smooth and mellow with a touch of honey flavor. In the end, the tuocha came out ahead, but just barely. It had a more earthy, Autumny, sweetness and a hint of lingering beeswax aroma. The Bing had a slightly thinner mouth-feel and some infusions had more pronounced notes of grass and artichoke.

Back on the shelf now fellows. Next time I see you you'll be 10 years old!
Posted by Brett at 4:32 PM No comments: