My large public high school in Sparks, Nevada required a minimum of 2 foreign language credits. Unfortunately we were only given three choices, Spanish, German or French. I went with Spanish, thinking it would be more useful to me in the long run. I stuck with it for 3.5 years then I got burned out (on both Spanish and high school in general). During this time none of my Spanish teachers stood out in my mind as actually caring very much about the subject or the students. One teacher in particular, Mr. C. relied way too heavily on videos. We watched "Balto" and "Dead Poets Society" dubbed in Spanish twice during the same year (bleh). He was also crazy about a teeny-bopper pop star named Fey. To this day I still get Media Naranja stuck in my head. (I provided the link in case you enjoy watching horrible train wrecks... but be warned it is a most vile poison.)

Now I study Mandarin Chinese. I've been on this path for about 9 years now (starting around the same time that I decided to get serious about a career in tea). I took two "Conversational Chinese" classes during those early years. They were the type of classes where, for $99, a handful of newbies, and one less-than-stellar teacher are mixed together for eight weeks in a tiny community collage room with plastic chairs and a dry-erase board. By the end of these classes most of us could say Ni Hao, count to 3, and read pinyin dialogs without actually knowing what we were saying.

After this, I collected many Mandarin books, and flash cards (which I sometimes even looked at!) and occasionally borrowed Pimsleur's (boring) CDs from the Seattle Public Library to listened to while driving around town. Occasionally some small bits of Mandarin would stick in my brain but I was getting hungry for a better way.

With the help of some birthday money, I paid the relatively pricy tuition needed to begin the Mandarin 101 course offered by the (now extinct) Seattle Language Academy in Fremont. This was really just a glorified version of those same Conversational Chinese courses I'd taken a few years earlier. The teachers struggled with lazy students, questions that brought them way off topic, and students who simply could not wrap their brains (and tongues) around the pronunciation of Mandarin.

Despite these distractions, things were getting better. I practiced whenever possible and I was getting better at pronunciation. My first tutor, Shiuwen (from Floating Leaves) was a wonderful teacher. Before she had a tea house, we would meet at a downtown coffee shop, drink tea and chat. After Floating Leaves opened in Ballard, I attended some of her Mandarin language nights. These were great fun but I became more and more convinced that one-on-one study with a dedicated tutor was the best style for me.

It was around this time (2005) that I made up my mind to visit Taiwan. I had an amazing trip and found the "full immersion" incredibly helpful. By the end of the trip I could really feel those language synapses firing. Mandarin just came easier for me while in Taiwan.

After I returned to Seattle I started hunting for a new tutor. Through Craigslist, I found Danlie. She was Taiwanese, and she was awesome. We talked in Mandarin about music and tea while hanging out at Miro, or Mr Spot's Chai House. I took lots of notes and felt like I was making slow but measurable progress.

After Danlie moved away, I had two other wonderful teachers. About four years ago, my infant daughter and I would meet up with Angela (a piano player from Beijing) at Teahouse Kuan Yin and I'd practice my Mandarin for as long as my daughter's patience would hold out. After Angela moved away I met Cindy (also from Taiwan). My daughter and I really enjoyed our weekly lessons with Cindy for nearly two years.

Those days were definitely the pinnacle for me and Mandarin. I spent hours writing traditional Chinese characters, I traveled four more times to Taiwan to buy tea, eat amazing food, and study tea culture, and I listened to lessons on Chinesepod everyday.

Lately, with two young kids, two jobs, and many responsibilities around my home I haven't had enough time (or money) for Mandarin. This has resulted in what I fear to be "major backsliding." I still try to practice whenever I get a chance... but it seldom seems to actually happen. What I need is a private tutor who will come to my house and chat with me while I take care of kids, do laundry, and make dinner. Oh... and he or she will have to be OK with working for chá instead of dinero.

What languages do you study? How does my story compare to yours? Please leave me a comment or link to your own blog posts on this subject. Xiexie!
Posted by Brett at 4:33 AM 3 comments:

Email ThisBlogThis!Share to TwitterShare to FacebookShare to Pinterest
Labels: Mandarin 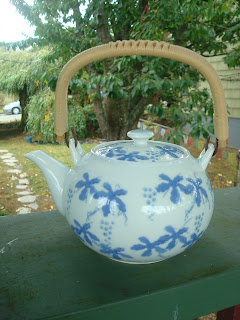 Brews: Any type of tea.
Specialty: Great for brewing a few mugs of black tea for friends and family.
Story: I purchased Serenity a few days ago at Goodwill for $2.99. I had been looking for another "work horse" teapot to replace Chip (who unfortunately past away a year ago). I'm very happy with my newest teapot.
Super Powers: Serenity has a hypnotic gaze. If she looks into your eyes she can read your mind. If she focuses her powers she can control your mind or even make you permanently forget selected memories.
Posted by Brett at 1:04 PM 3 comments:

Email ThisBlogThis!Share to TwitterShare to FacebookShare to Pinterest
Labels: League of Pots, teapots 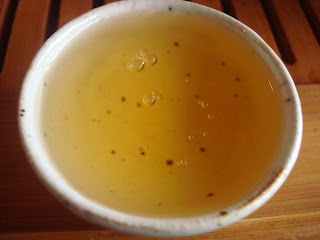 The cake has been resting on my sheng puer storage shelf since I purchased it in 2006. I'm tasting and reviewing it today for the first time. To the best of my knowledge, I've never tried any other teas from Tianyi factory before. 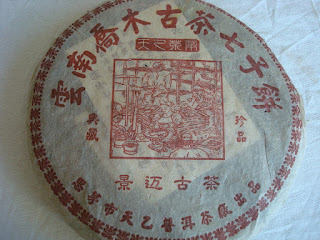 The dry leaf looks dark and pretty. It has a sweet earthy smell like crispy Autumn leaves. I'm excited that this tea may be starting to deliver some complex aged-tea flavors. 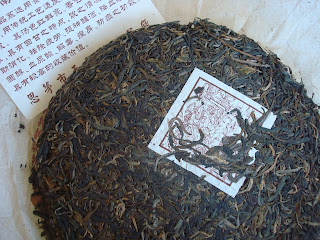 Brewed in a medium size gaiwan with water just below the boil, this tea proved delicious indeed. It produced numerous deep amber cups with thick syrupy mouth-feel and many strong bubbles. It had woodsy pine-needle aroma. 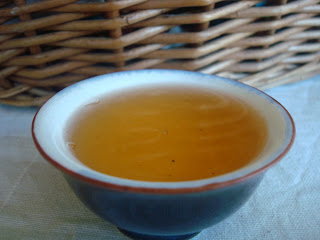 This is a fine cake of puer tea in my opinion and a great accompaniment to a cool, cloudy, misty Seattle Autumn day. It combines subtle old wild forest notes with savory, herbaceous, sheng puer flavors. Ten infusions left me feeling comfortable, relaxed and alert.
Posted by Brett at 10:44 AM 2 comments:

October 6th and 7th (and the weeks proceeding) were very busy for Cinnabar and me because, for the second year in a row, our tea company had a booth at the Northwest Tea Festival.

The whole weekend was a happy blur for me... but some memorable highlights include: Meeting the cool folks from Portland's The Jasmine Pearl tea shop, drinking aged tea with Charles and Laurie Dawson, serving Kenyan black teas and Korean green teas in the tasting rooms, meeting fellow blogger Geoffrey N., seeing Matthew London's beautiful tea photos, and lecturing about tea basics to a large group of smiling tea lovers. 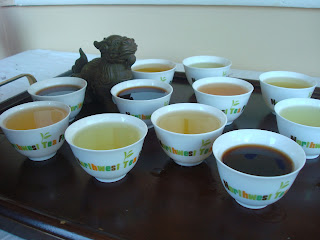 An infinite amount of thanks is due to Julee, Doug, Kyohei, Annie, Ken, Anne Marie, Brian, and several other hard working members of the Puget Sound Tea Education Association. These local tea lovers put in so much hard work and planning to pull off this grand event.
Posted by Brett at 10:15 PM 1 comment:

A few days ago, I received a beautiful 2013 tea calendar put together by the esteemed tea writer and photographer Lindsey Goodwin. I first saw it advertised on our mutual friend Steph's tea blog and after checking it out on Lindsey's Copy and Taste Blog I knew I needed one. 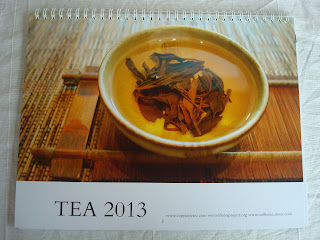 This calendar is unique in that it features many major and minor holidays from all over the world. That alone would have been enough for me... but Lindsey's calendar goes much further by including lots of tea-related dates every month. For example, February 4th is the Chanoyu Celebration of Dawn in Winter, and April 18th kicks off the Shanghai International Tea Culture Festival. Who knew?! Another cool thing about this calendar is that every month features a recommended tea. I'm going to make a point of drinking at least one cup of these recommended teas throughout 2013!
Posted by Brett at 2:22 PM 2 comments: