Last week I traded some tea with my generous friend Israel (of Tea Sleuth blog). One of the treasures I scored was this fresh Dragon Well green tea from Life in Teacup. This will be the first tea I've ever sampled from this company although I've been a devoted fan of proprietress Gingko's blog for several years.

The full name of this tea is 2012 Pre-Qingming Da Fo Longjing (明前頭採大佛龍井) and all of its vital statistics can be found here.

Each leaf and bud set has a similar size, shape and color (a mix of jade green, pea green and yellow). They are very beautiful and have a wonderful nutty, sweet, grassy aroma. 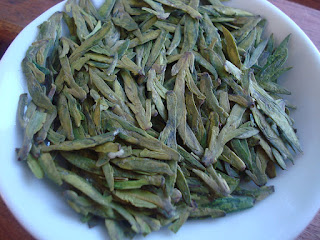 I selected a 100 ml gaiwan with about 3 grams of dry leaf for today's review. These parameters yielded three superb infusions with 165° F water. The first and second steeps were about 1 minute and the third was about 2 minutes.

The tea soup is a sunny yellow color with many tiny flecks of oil glistening on the surface. A preliminary sniff triggers salivation via its rich, toasty aroma. This tea is everything I look for in good Dragon Well green tea. It has a thick, brothy mouth-feel and a sweetness like fresh picked snow peas. 很好喝! 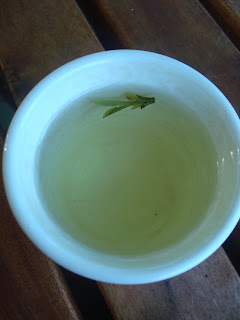 Hojicha is a toasted Japanese tea. I like it, it makes a nice hot beverage, but I seldom crave it. I drink plenty of hot tea everyday... but on those particularly warm and sunny days (a rarity here in Seattle) I sometimes dabble in iced tea too and Hojicha is one of my favorites.

Back in 2001, my first year as a tea seller, my tea mentor Donna Fellman suggested I add a big pinch of dried spearmint leaves to Hojicha. I thought it tasted wonderful and have made it at least once every summer since.

Today I tried it with 5 fresh spearmint leaves from my yard. First I ripped up and muddled the spearmint in a jar. Then I steeped them with a rounded teaspoon of hojicha leaves for ~5 minutes with near boiling water. After it cooled, I poured it over ice. The result, garnished with a spearmint sprig, was divine.

I feel like this would make a nice ice tea to serve at a summer garden party or barbecue. 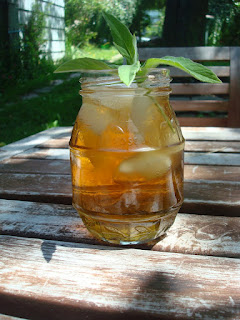 Odessa, Texas 1988 - My friend Micah and I had just spent the morning catching horned lizards, digging holes, and kicking tumbleweeds. We were hot and thirsty and ready to go inside for a while to play Nintendo. The Legend of Zelda to be exact... We had made it all the way to Ganon but just couldn't figure out how to beat him. We knew it had something to do with the silver arrows, which we had, but we couldn't stay alive long enough to do the deed. Apparently there was a red ring hidden someplace that was supposed to make us strong enough but we never found it, and to this day I've still never beat that game.

Micah's mom, Shirley, was in their kitchen and his older brother was listening to Michael Jackson on his record player. We each drank a plastic cup full of tap water and then asked for some Kool-Aid. There was none to be had but Shirley asked if we'd like to help make some tea. Micah had little interest... but I was intrigued. My parents, who were from the "North" always drank coffee. I'd never made tea before so I volunteered to help. The first step was to boil water. This was achieved by filling a metal sauce pan from the tap, placing it on the stove, and then waiting until it reached a rolling boil. The next step was taking an orange plastic, half-gallon pitcher from the cupboard and adding two cups of white sugar and five or six tea bags. The water was poured in and left to steep for about 10 minutes. Shirley removed the bags and I mixed the tea with a large plastic spoon. We then poured our "tea" into tall plastic glasses full of ice and put the pitcher in the fridge. I took a sip and proclaimed: Tea is good!

After that, Micah and I each took a glass of "tea" and a bag of Chips Ahoy! (the exclamation point is apparently a vital part of the name) cookies and headed into the living room to play video games (for many hours).

(Now you know my earliest tea brewing memory. What's yours?)
Posted by Brett at 4:02 PM 6 comments:

Tea seed oil is a delicious cooking oil made from cold pressed tea seeds. The most common tea plant used is Camellia oleifera. Like most other natural, unrefined, plant-based oils, it can be considered a very healthy addition to one's diet.

My first experience with tea seed oil was nearly ten years ago when Jason Chen, a local tea mentor of mine, began to import, promote and distribute the product around Seattle. Teacup (the shop I worked for at that time) carried Jason's oil and I purchased a few bottles. I found it to be very tasty and enjoyable but despite our best efforts the market was not quite ready for another exotic, pricey, gourmet cooking oil.

I haven't had any tea oil for many years but I just recently discovered a new company called Arette Food Inc. that is selling their own line of high quality organic tea oils. Thanks to my wife's connections in the nutrition world I was able to sample their pure, unflavored tea seed oil. 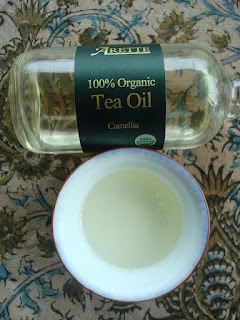 I poured about a teaspoon of Arette's oil into a teacup and sipped it slowly. It is not nutty like some oils and it doesn't have the complexity or peppery finish that great olive oil possesses. What is does have is a sweet, fresh and creamy flavor that I think is wonderful. This oil, with its high smoke point (485 °F ) and long shelf life, is different and versatile enough to warrant a spot in my cabinet next to other oil staples such as olive, sesame and coconut but its higher price may make it a "rare treat" or "fancy gift" for the time being.
Posted by Brett at 12:45 PM 2 comments:

I once read that if you poured boiling water into a well-seasoned yixing clay teapot, without tea leaves, you would still get a little tea flavor and color. I don't think I have any teapots that would qualify as "well seasoned" but three of my pots, El Greco (aged puer), Sandy (heavily roasted oolong), and Sam (high mountain Taiwanese oolong) have each been used dozens of times to brew great teas. 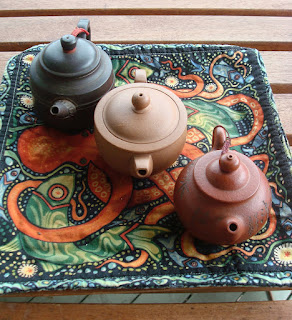 For today's experiment, I filled each of these three teapots with freshly boiled water, covered them with a thick towel, and then waited 1 hour before pouring the water into three separate tea bowls. 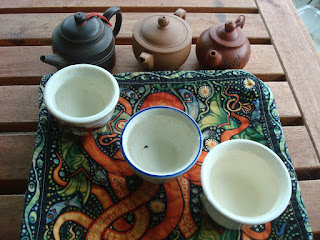 Each cup of warm water had the faintest hint of yellow color. Sandy's cup had one tiny speck of old leaf in it.

I started with Sam's water. It had a subtle sweetness and the water felt soft and creamy. There was also a hint of citrus in the water but it hid in the back of my throat and peeked out only when I exhaled.

Sandy's water was soft and thick in my mouth. It had a lick of nuttiness and a floral-mineral aftertaste that reminded me of Tie Guanyin oolong.

El Greco, like Sam and Sandy, also yielded delicate sweetness and substantial mouth-feel. It had a "brighter" taste than the other two pots. While Sam had citrus in the back of the throat, El Greco had an up front lemongrass note.

I was pleased with the results of this casual experiment and plan to repeat it in a few years using this blog post as a baseline. Next time I'll include a few other tea lovers in the tasting to "blind taste test" the water in hopes of limiting the possible effects of "power of suggestion."

Please let me know if you have ever tried anything like this or if you have any other ideas for ways to improve this experiment.
Posted by Brett at 12:01 PM 6 comments: