The South Seattle Tea Estate's second harvest of 2010 took place on September 30 at 2:00 PM. The afternoon was 69° F and sunny after a cool morning. No tender leaf-and-bud-sets were available so the harvest consisted mainly of very large mature leaves. That was just fine with me because I was determined to make a very different tea than my previous attempts.

In total, I plucked 35 grams of raw leaf from my two tea trees. These leaves were withered outdoors on a pizza pan in mostly full sun until sunset (Exhibit A). They spent the next 2 days inside withering on my kitchen table.
Exhibit A 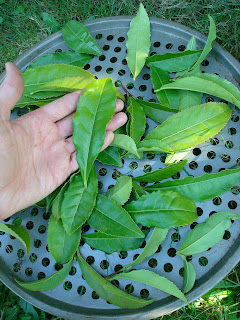 On October 3rd, I put the slightly limper leaves into a brown paper bag and put them into my backpack to accompany me to the NW Tea Festival. When I got home the leaves had a tiny bit of oxidation appearing around the edges. At 6:00 PM on October 3rd I shook the leaves fiercely inside a glass bowl for 15 minutes (Exhibit B).
Exhibit B 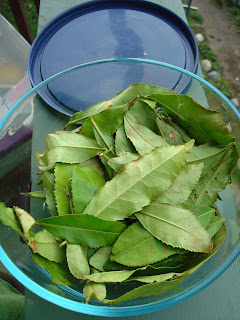 The following morning (today!), the leaves definitely appear darker, redder and limper. They now have a subtle floral scent along with a unique "corn and rosemary aroma" that I always seem to detect in my homegrown tea.

At 8:15, 9:50 and 10:15 AM I rolled the leaves tightly in a cloth napkin (Exhibit C). After each roll I opened the napkin and allowed the limp leaves to rest (Exhibit D).
Exhibit C 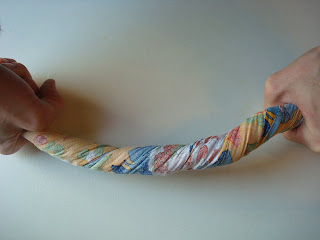 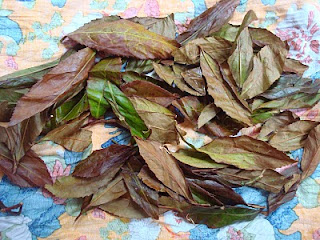 At noon, the leaves were baked (on the same pizza pan from Exhibit A) for 5 minutes at 350° F.

I was hoping to still have slightly limp leaves with some moisture remaining so that I could do another round of twisting and baking, but because the oven was so hot and the leaves were spread thinly and evenly, they emerged from my electric oven bone-dry and crispy!
The huge crispy, twisted leaves were gorgeous, but I doubted they would be able to infuse very well (assuming I could even stuff these giants into a teapot), So at this point I decided that this tea was not meant to look pretty.

I rolled them back up in the cloth napkin and proceeded to give them an "industrial strength twist" (Exhibit E). There was no turning back as the tea leaves snapped, crackled and popped inside the twisting cloth. 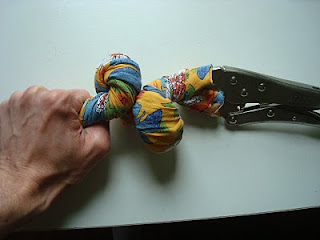 I immediately dumped the now broken leaves into a dry, heavy-bottomed, steel pan over medium heat and toasted them for three minutes while constantly shaking and stirring them. After which I dumped the hot leaves on to a plate to cool down quickly.

Today's 13 grams of finished tea (Exhibit F) is a kaleidoscopic mix of broken leaf bits and stems. It is definitely not as pretty as my previous homemade teas but I believe that I made the right choice by crushing the leaves.
Exhibit F 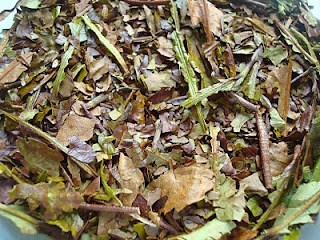 Any Seattle tea friends want to try this tea with me? I will serve it for the very first time ever to participants in my October 9th tea class (see yesterday's post for details). Only then will I know for sure what I have created and be able to give it a proper name.
Posted by Brett at 8:44 PM

This is so cool! Look forward to your cupping report!

WOW! How amazing. Can't wait to hear how it tastes!

Are you going to make it in accordance with Oolong method? What kind of this tea plant?

At 24:00 the day after tomorrow we'll leave for visiting Tikuanyin farmer and hope to get some good tea.

Hi Daniel. Thanks for the comment.I will brew the tea in a small teapot. I'm not sure what parameters I will use. Most likely my first attempt will be 200 F water for 3 minutes.

The tea plant types are a mystery. One is from Portland, Oregon and the other from Western Washington State.

Good luck on your hunt for Autumn Tiekuanyin!