In July 2007 I received a small shipment of puer tea cakes (普洱餅茶) imported directly from Yunnan, China. These cakes were all young sheng cha (生茶). Among the 8 different varieties I imported, one was the "2006 Long Yuan Hao Gold Medal Bingcha" (龍園號金級餅茶). All the tea cakes look, smell and taste great but this cake is a standout for me. After I posted some photos of these new tea cakes my online tea buddy (thanks John!) mentioned that he had the tuocha (沱茶) version of the same 2006 Long Yuan Hao Gold Medal tea in his personal puer collection! We decided to do a little puer trade, and age the teas together. This experiment should help us to further understand the ways different compressed tea shapes will age. Also, this tea experiment may provide insights on American puer aging regionalities, because I am in Seattle and he is in Virginia. I plan to cup these teas together every 3 years and post the tasting notes to my blog.

On August 8, 2007 I did the first cupping to get a baseline on these young green puers. Both the Bing (cake shaped) and the Tuo (bowl shaped) had long twisted leaves and a really sweet aroma. The bing had a little more smoke in the aroma while the tuo was subtle. The dry leaves looked similar with a gorgeous mix of color including green, white, orange, yellow and brown.

I used the bowl and spoon cupping method with 5 grams of each tea plus 1.5 cups of 200 degree water. I mixed each tea gently while smelling the spoons. They both smelled amazing. These teas have very lively and complex aromas. The tuo's aroma was softer and a bit fruitier, like a green apple. The bing has more warming smoke and a camphorish spice, but these notes were also present in the tuo.

After 2 minutes, I ladled the tea soup into two small tea bowls. The color was brilliant yellow on each cup and both had crystal clear broth. I tasted the Bing first. It was sublime. The taste was very sweet and smooth. The smoky aroma was gone as I sipped the tea. In its place was a fruity, herbaceous aroma with a hint of licorice. Then I tasted the tuo. It had a great, although slightly weaker, taste than the bing. Also, it finished with a tiny hint of astringency that the bing, steeped to the exact same degree, did not. After a few more sips of the tuo its flavors seemed to adjust and instead of astringency I felt a sparkling sweetness that I associate with high mountain oolong teas.

I added more water several times and enjoyed each infusion, then I took a closer look at the infused leaves. I found that those of the tuo were slightly less even, having more small, medium and large bits than the bing which was almost completely large twisted leaves.

I savored each puer for a short time as did my wife, who slightly favored the bing, for its superior complexity and smoothness. We both agree that each tea was superb and look forward to revisiting them every 3 years. 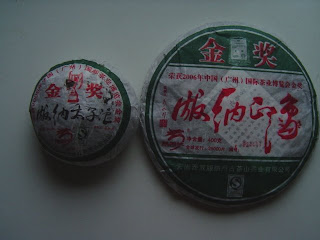 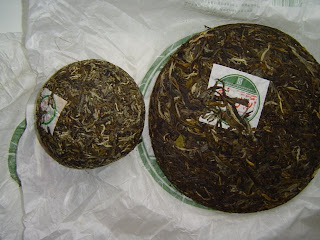 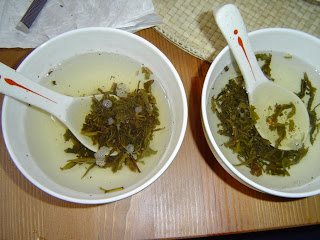 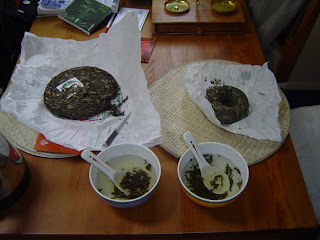 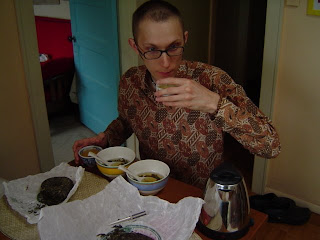