The Sakuma Brothers farm in Skagit County, Washington State has been growing tasty berries for over 85 years. I first heard about their tea growing experiments about 6 years ago when a coworker at the Teacup purchased a small bag of their white tea at a farm stand. At this time, the idea of growing tea plants in Western Washington was entirely new to me and I was excited to taste the tea. My impression of that tea was poor. It looked and smelled pretty good but the flavor was lack-luster and tasted strongly of raspberries.

Until just 2 days ago, I had not tasted any other tea from the Sakuma Brothers farm but I still tried to keep their operation on my tea-dar. I met Richard Sakuma at World Tea Expo and I could tell that he is a true tea lover and eager to grow and process high quality tea. A year or two later, I heard that Sakuma's tea making skills were getting much better thanks to practice, study and joining a Taiwan tea tour with Floating Leaves. Last week my desire to taste their tea again got the better of me and I ordered a bag of their current Oolong offering.

The dry leaves are brown and green with flecks of silver. They have a mild aroma that reminds me of fresh hot soy milk. 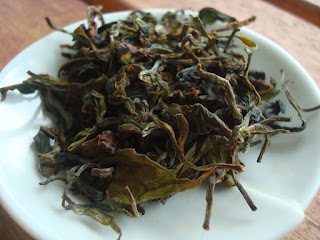 The tea pours a sunny yellow liquor with a fragrance of oranges and hay. 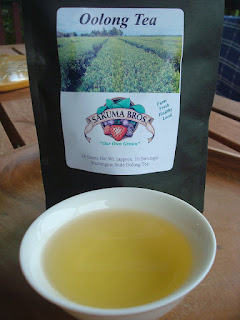 The mouth-feel is light and fleeting with a sparkly texture and the flavor is very nice. It most certainly has berry notes but they are subtle. For me it tasted like a weak, floral, jade oolong brewed with a chunk of tart, unripe strawberry and possibly a leaf or two of rosemary. It is unlike any other tea I've ever had but I would call it complex, interesting and enjoyable. It doesn't have much of an aftertaste (which is, of course, preferable to a bad aftertaste). I would have to say that for the very new world of Washington State tea, this is the best one I've sampled so far. I find that to be very exciting and encouraging! 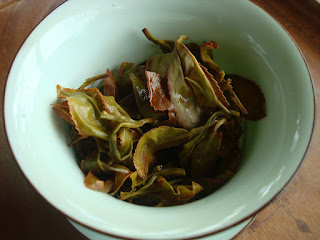 I've been wanting to try Sakuma's oolong for awhile - just to see how it holds up to a gongfu prep. I have had their Sun-Dried White, and it was wonderful in its buttery profile. Great taster blog, Bret.

I enjoyed tasting this oolong this morning and completely agree with your tasting notes. The tart flavor was quite surprising for an oolong, but refreshing. Pretty good stuff!