This is the alley behind my house. 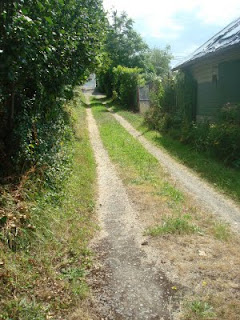 It is filled with many urban herbs. One of which is wild chamomile (aka pineappleweed). 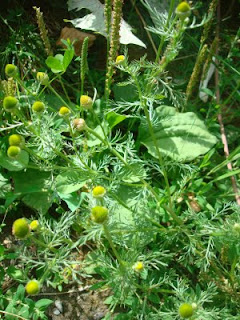 As it turns out this useful and tasty plant can be found all over Washington, especially in sandy soil near trails and paths. I've gotten into the habit of picking a little flower and crushing it between my fingers because it really smells amazing.

Wikipedia says: "The young flower heads can be used to make tea by steeping a handful of the flowers in hot water for ten minutes and then straining."
OK. I can try that. 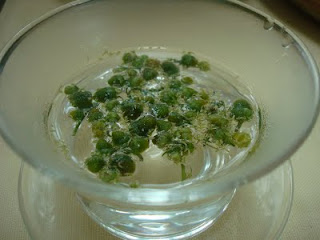 I used about one teaspoon of flowers in a half full gaiwan with boiling water. After a ten minute infusion the liquor is a pale yellowish-green color.

The smell is lovely in my opinion. It's like the freshest chamomile aroma I've ever smelled with a twist of ripe pineapple juice. The flavor is sweet, soothing and floral like any great chamomile flower infusion would be.

If you dig chamomile tea then you would probably like this.

I am starting to feel pretty sleepy.

Zzzzzzzzzzzzz
Posted by Brett at 2:41 PM

My mother used to grow Chamomile in the back yard, and a few times I made tea from it. It really is potent stuff, its amazing how tea made from it can have you feeling laid back, relaxed, without a care in the world in no time flat.

I love this plant! It definitely grows around my area too, although I haven't yet found an abundant source of it here in Philadelphia. I enjoyed smelling it as a kid, but I've never tried making an infusion out of it. It smells so good.

I also think this is a great series that you've started here! I'm eager to see what else you come up with!

Early in the previous fall semester Jason C. and I wok fried some pineapple mint in an attempt to prepare it something akin to a green tea. When we brewed it in a gaiwan it ended up having a wicked qi that gave us all pounding headaches and hence we have never touched it again. Nontheless its still interesting to see what some plants taste like brewed.