I have started an odd little holiday tradition. I drink a small cup of Ba Bao Cha (八寶茶) (eight treasure tea) and then I blog about it.

As I mentioned in my post Ba Bao Cha Revisited from 364 days ago, my friend Tiffany gifted me 19 single serving packs of Ba Bao Cha. I only drink one pack per year so... 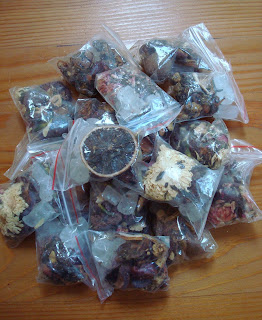 Besides rock sugar and a scant amount of green tea, every pack is a little different. I chose that pack on the top which appeared to be the only one with an orange slice in it. 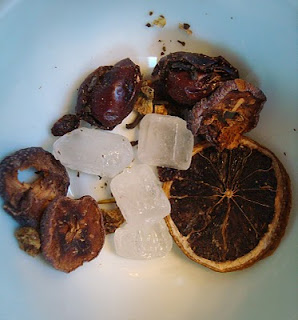 I steeped it for five minutes with boiling hot water. The resulting soup had an orange color and a fruity aroma.

I asked my wife to try a little sip. She did, and then instantly made a "yuck face." She did not want anything to do with it.

I then asked my almost three year old daughter, who was busy playing by herself in the living room and had not witnessed her mother's negative reaction, to taste it. She did... and had the exact same reaction as her mother.

I, on the other hand, didn't mind the flavor too much (although I'm quite sure that I could never drink more than 2 ounces in a single year). I liked this pack a little more than last year's sample because it was fruitier and less like drinking perfume.

Here is a shot of this year's eight holiday treasures! 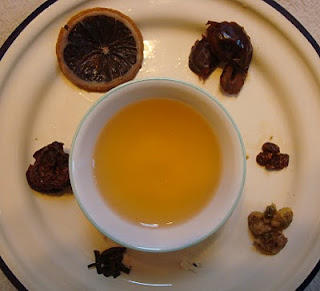 Now lets see... I have: two cherries chopped in half / four goji berries / two chrysanthemum blossoms / rock sugar (which I'm not sure I would actually count as a treasure but hey whatever) / some sliced strawberry / one orange slice / and about 1 gram of broken green tea leaves.

Oh well. I guess it's now time to go and brew some good tea anyway. Maybe next year I'll get eight treasures. Whether or not you even care, you can still count on me to tell you all about it in December of 2011.

Haha, glad to hear that the ba bao cha I sent will last you a couple decades! Not sure if it'll age as well as a puerh tea though :) Happy new year~