January 15, 2010 marked the first day of my most recent Taiwan tea trek. It turned out to be an exciting day filled with grand adventures and wonderful food.

My plan was to spend the entire day with my Mandarin teacher's aunt Rose and uncle John and then to have dinner with them, several other friends, and her parents Henry and Mei.

In an email sent to me by Henry prior to traveling, he had written, "I might introduce you to one of my good friends, Mr. Lin, who is a 'lover of queer stones' and you may see his interesting collections." As you might imagine, I found that very intriguing.

John and Rose were the sweetest couple and they took very good care of me. After a fortifying round of Da Hong Pao (大紅袍) tea , we had a nice light breakfast at a vegetarian buffet. Then the three of us took a cab to Jiufen (九份) for some tea and sight seeing. 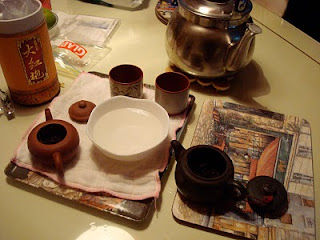 Jiufen is a cool little tourist town set in the cliffs overlooking Taiwan's beautiful Northern coast. We wandered the pedestrian-only "old street" (老街) and I purchased some inexpensive tea scoops from a vendor specializing in wooden trinkets. I also purchased an adorable pair of slippers for my daughter. In addition to shopping and chatting, we also sampled lots of tasty little snacks from a wide variety of food vendors (some pictures of which can be found here). We stopped for tea and lunch at a scenic tea house with a breathtaking view of the north coast and ordered a pot of Dong Ding oolong (凍頂烏龍). 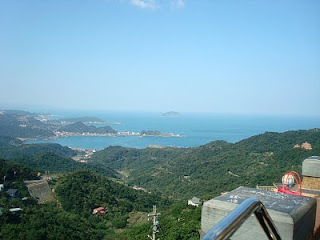 After Jiufen we spent a few magical hours exploring the wild natural rock formations at Yeliu Park. I already blogged about that so if you missed it here's the link.

We all had a great time chatting and exploring as we drove counterclockwise around Taiwan's north coast. Our taxi driver quickly became our new friend.

Unfortunately, my camera ran out of power due to all the photos I took at Yeliu. So the rest of the evening only exists in my hazy memory. I say "hazy" because at this point I'd been awake for over 48 hours and although I was having an incredible day... a body can only run so long on adrenaline and good tea.

We stopped at an awesome little beach park called Stone Gate (石門), which was covered in shells, and then we drove through Danshui (淡水) and back into Taipei. Our dinner destination was an old-style Taipei seafood restaurant that sourced most of its ingredients fresh from Penghu island (澎湖島). Of course I didn't partake in any of the seafood, but my hosts treated me to a vast array of vegan dishes including a hearty noodle soup. John and Rose ordered a teapot of "hot Coke with lime," which was actually pretty tasty. By the end of the meal I was comfortably stuffed.

After dinner Henry said that it was now time to see the "Queer Stones." I had no idea what to expect. We walked through a confusing maze of Taipei streets for almost 15 minutes before stopping at the entry gate to a private residence. As we walked through the gate, I knew I was in for a truly special experience.

The house, or shall I say "wondrous mansion," was filled with the most amazing collection of stones. Some were huge and some were tiny, but most ranged between soccer ball and basketball sized. What made them so special was the natural pictures found on them. I came to learn that many Chinese are into Qi Shi (奇石) (often translated as "strange stones.") If you run a Google search for "奇石" you will find hundreds of Chinese websites and blogs devoted to the phenomenon. I was told that the stones are 100% natural, but some cleaning, buffing, and polishing is permitted. Mr. Lin (林同濱) (who actually turned out to be in Beijing at the time) travels all over the world searching for queer stones to feed his fascinating obsession and he had hundreds of jaw-dropping, awe-inspiring stones in his collection.

I was pretty bummed that my camera battery was dead, but I was given a pamphlet with some of Mr. Lin's stones. Here are six photos of Qi Shi that I took from this pamphlet. (My deepest respect and thanks to the original photographer and Mr. Lin. I truly hope that you do not mind my taking and using of these photos of your stones. I welcome any input at blackdragontea@gmail.com). 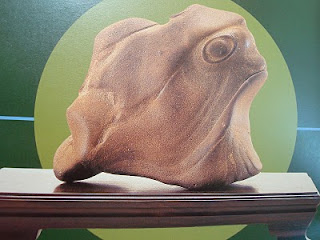 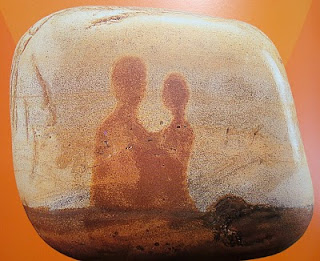 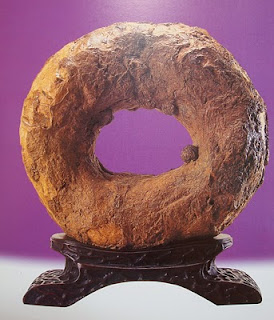 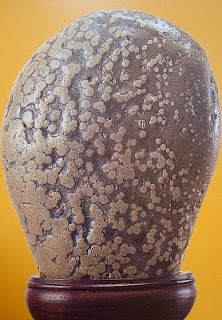 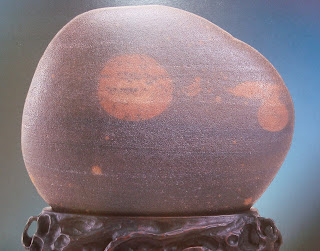 Surrounded by a museum of stone treasures, we all shared an amazing Hehuan Shan High mountain oolong (合歡山高山烏龍茶) and chatted for hours. I really wish I could have spent longer exploring the world of Qi Shi, but my hosts could tell (quite to my embarrassment) that I was about to fall asleep on the couch. At this point I was taken back to Henry and Mei's apartment to get some much needed sleep.

Those strange stones are beautiful! I've never heard of this hobby before, and I come from a family full of geologists and geographers who have shelves full of stones and soils. :) I've sent them a link to your blog and encouraged them to do some exploring. Thanks for posting the symbols for "strange stones," so I could do some googling. My favorite stone so far is here: