These cakes have a pretty purple wrapper with little plum (or cherry?, or apple?) blossoms printed on the front. Underneath the big "Zi Yun Hao (紫雲號)," it says "yuan cha" (圓茶), which means "circle tea." That leads me to think there are probably bricks of this tea available too (either that or the good folks at Menghai just wanted to teach what circles look like).

In case you didn't already know, Dayi (大益), meaning "big returns," is a popular product line of the Menghai tea factory. The Dayi logo is in the upper-right corner (and yes... I am aware that circles do not have corners) of this cake. 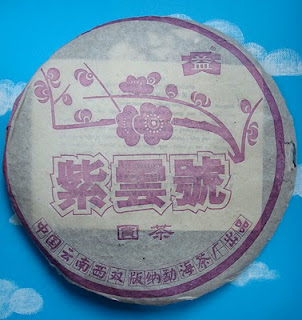 The dry leaf is a lovely mix of earth tones and has a subtle, peppery, leathery, sweet smell. 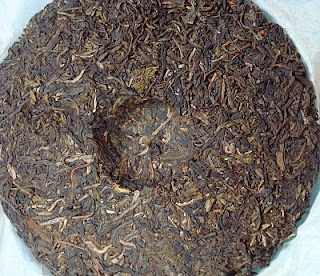 For this session I used a three gram chunk of tea in Xiao Xiao (my smallest clay teapot). I used boiling hot water and did 8 shortish infusions. 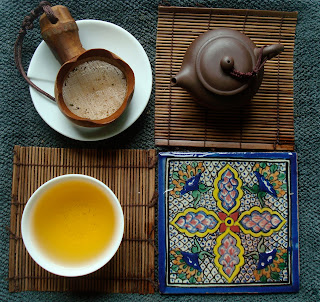 The flavor is dry and fruity with a pleasant woody-grassy undertone that reminds me of some Nepalese teas I've tried. My tasting notes included: lavender, gentle smoke, plum and camphor.

I feel that this cake tastes a little younger and greener than my 2002 Elephant Mountain Dayi cake (which is the only other Dayi cake in my collection). I should cup these two teas at the same time someday.

In closing, I'd say that the Zi Yun Hao is a nice cake of tea and I look forward to revisiting it as the years go by. 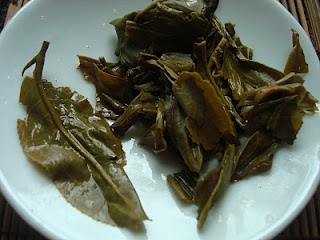 Have you ever thought of using the puer cake wrappers to use as wall paper? They are so beautiful. Couldn't you just imagine a whole wall at teacup or where ever plastered with puer cake wrappers? Yeah. That would be neat.