Last Friday my friend (and former boss) Brian Keating came to visit me at work. It was his first time visiting the new Teacup location. BK (as I call him) is very knowledgeable about tea and herbs and he greatly enjoys drinking white tea, green tea and oolong tea. Although he knows that puer tea is a favorite style of tea for many connoisseurs, he has never really gotten into himself.

During our chat, he mentioned a large cake of puer tea given to him by a puer loving buddy named Bill. According to BK, Bill currently lives in Hawaii where he collects puer tea and practices meditation. We both agreed that this sounds like a sweet way to spend your time.

The cake of tea that BK had been given was a tightly compressed melon shaped sheng puer tea (普洱瓜茶). BK says it has been resting in a cupboard since he recieved it. I got the impression that BK was a little intimidated about breaking into it do to its large size (500 grams) and tight compression. He asked if I'd be interested in seeing it and maybe tasting it. "Of course I would!" was my enthusiastic reply.

Saturday morning BK came back to the Teacup with the tea itself. I read the wrapper to identify the tea. The neipiao (內票) (internal ticket) clearly stated the melon tea was "1999 produce." The name of the tea (written around the top of the external wrapper) said 千年古茶树茶, which translates to "one thousand year ancient tea tree tea." I can tell this is a high grade piece of puer tea but I doubt the leaf is from 1000-year-old trees. I think that is just a poetic name but it would be awesome if it were true. In the middle of the wrapper, something is written in Tibetan, and it also says: "Made by Puer Tea Co., LTD" at the bottom in English. 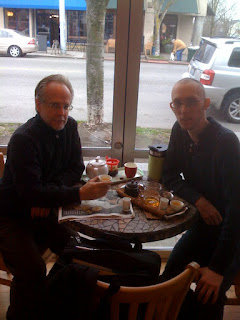 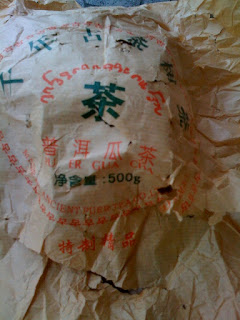 I pried off about 8 grams of tea using a butter knife and brewed it in a small clay pot. BK and I knew we were drinking a great tea from the first sip of the first infusion. It had a beautiful clear yellow broth with a hint of red. The color was just the shade I usually expect from a tightly compressed whole cake of ten-year-old sheng cha aged in North America. I wonder if it was ever stored in Hawaii and what year it was given to BK. Maybe if Bill ever reads this post, he will leave a comment giving us more information about the tea.


BK and I enjoying this fragrant puer:


BK, my coworker James and I all tasted many delightful infusions of this tea. We detected many complex flavors such as apricot and honey. James even picked up an apple cider-like flavor. BK said this was the best puer he'd ever had. I agreed that it was a fantastic tea. BK was very generous and gave me half of the melon cake to add to my own puer collection!


Brewing this 普洱瓜茶 at Teacup: 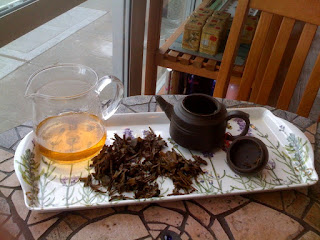 Brett was kind enough to share some tea with me at the TeaCup a few weeks ago, and for the first time I experienced in a tasting, four or five shifting but distinct tastes, one right after another. It was an interesting experience. Brett, thanks again for another adventure in the neverending world of tea. I'm also liking my new tea pot from Century :) And I need to use my store credit cause I've run out of High Mountain :(