Last Summer I met a really cool fellow named Marty. He lives in Xining City in China (西宁市,中国*) and studies Mandarin and Tibetan. He is very passionate about improving the relationship between the Chinese, Muslims and Tibetans who all share this diverse region. According to Marty, the most popular tea among the Muslims in this area is called Ba Bao Cha (八宝茶) (Eight Treasure Tea).

A few months after Marty returned to China, a mutual friend named Nicole also traveled to China. She visited Marty in Xining and at his request brought a package of Ba Bao Cha and a package of Tibetan brick tea home for me to try!** (I promise to blog about the Tibetan tea later.) 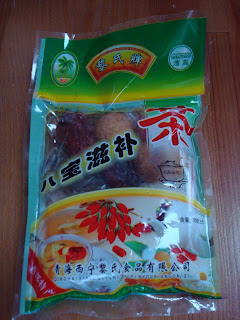 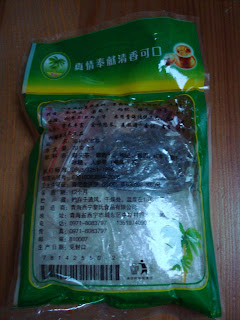 The contents of the package: 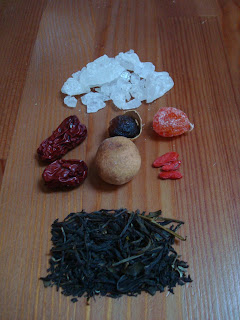 I decided to wait until Christmas morning to try the Ba Bao Cha with my wife, my sister and my brother in law. I now know that I didn't brew the tea correctly. I used "Chip" (a 20 ounce teapot) while the Chinese will typically use a 6 ounce gaiwan. Also, I reserved the sugar to mix in at the end because I normally don't like sweetened tea, but the Chinese will put it right into their gaiwan so that it will melt while the tea is brewing. Finally, I only steeped the tea for five minutes. That may have been OK if I had been using a gaiwan but our tea turned out far too weak brewed in Chip.

We decanted the liquor into our teacups and tried it first without sugar. It tasted fine, like a slightly smoky Chinese green tea, plus it had a nice fruity aftertaste. Then we each mixed in a heaping teaspoon of rock sugar. Unfortunately it was now way too sweet for our tastes. The sugar did bring out more fruity flavors but the cloying taste of weak tea and too much sugar was almost unbearable. We then steeped the Ba Bao Cha one more time for about 10 minutes... but the results were the same as our first infusion so we decided to move on to another tea.

Chip (the teapot) and the Tea: 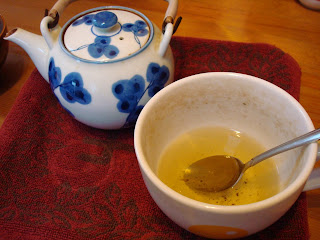 I found the Ba Bao Cha to be a very interesting and pleasant brew. I only wish I had another package so that I could try brewing it again in the correct style. Someday, I may even be inspired to make my own Ba Bao Cha recipe.

** Dear Marty and Nicole, 谢谢你们. Thank you so much. I was very surprised and delighted by your exotic gift!
Posted by Brett at 10:58 AM

I am glad you got to try this! In my little experience with this I would usually use half the bag of sugar, and with each infusion it got sweeter. Definitely isn't your typical cup of tea, but the fruits provided something fun and new!

That stuff tasted sweaty and fruity. Fun to look at- not good to taste :) Thank you for sharing it with us!

Hello BDTB! I was searching your blog for chrysanthemum tea and came across this post, which I'd previously missed! Tonight, I'm drinking 2 treasure tea (goji berry and chrysanthemum flower tea -- 2 of the 8 treasures) -- as an herbal cure-all test. I have added no sugar at all, but it is a little sweet already, so I can see how that heaping spoonful of sugar in the 8 treasure tea probably was too much! Anyway, my relatives visiting from TW insisted that I brew this, because it's good for the eyes. I did a little wikipedia research on the ingredients, and these ingredients are also purported to cure things like flu and congestion and high BP. Have you heard this before too? What is in this? Perhaps you and vegandietitian can do a joint post and illuminate your dear readers on the nutritional properties of and how to brew this interesting herbal combo!