On October 12, 2008, Black Dragon Tea Bar hosted its second annual “Seattle Chinese Tea Appreciation Festival.” This year’s theme was a “Tea and Garden Tour” in collaboration with the Seattle Chinese Garden (西華園). This garden is still under construction and it is being built in stages by a team of dedicated locals and Chinese artisans from our sister city of Chongqing (重慶). We in Seattle are extremely lucky that these fine folks are building such a treasure for our city!

The festival attracted a terrific group of tea lovers and sinophiles. In fact, this event drew nearly 40 people, making it my largest tea tasting to date! After a short introduction by myself, Jan Witner, a talented docent and chair of the Seattle Chinese Garden’s horticultural committee, provided an engaging and informative slide show about Chinese gardens and garden culture. After the slide show, we all headed over to tour the actual garden. We could not have asked for a more beautiful autumn day. The weather was clear and crisp with just a touch of warm sunlight. Many trees around the garden were showing yellow and red leaves and swaying in the cool breeze. We could see the foundation of the “Knowing the Spring Courtyard (知春院)" and get the general lay of the land.

After the tour we returned to the classroom to drink some tea and eat some incredible vegan treats provided by my brilliant wife Alanna. With the help of my good friends (and former coworkers) Jessie and Robert, I was able to provide many cups of excellent tea for my guests. The first tea was a fragrant Lishan (pear mountain) high mountain oolong that I had brought home from my May 2008 trip to Taiwan. The second tea was a spicy and complex 1999 loose leaf raw pu-erh (生普洱) from Menghai factory (勐海茶厂) that I had purchased in Yingge (鶯歌), Taiwan. The final tea was a rich and warming 1999 aged and roasted Rougui oolong (肉桂烏龍) that I had purchased from my friend and mentor Jason Chen. This same Rougui was also served at my first Chinese Tea Appreciation Festival back in December of 2007. All of the teas were very well received and the guests had a nice time chatting, sipping and relaxing.

Thank you so much to Jan, Alanna, Jessie and Robert for helping me to pull off this successful tea event! 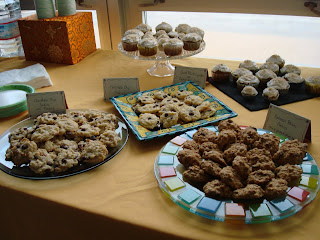 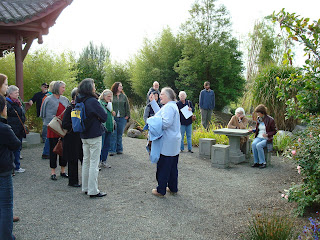 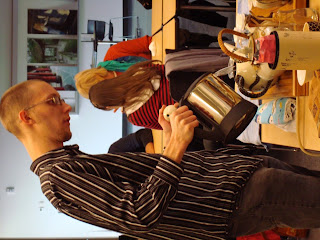 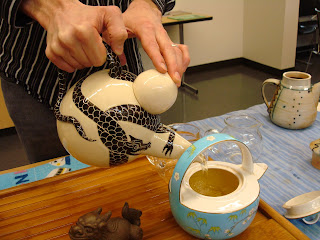 Happy People in the garden: 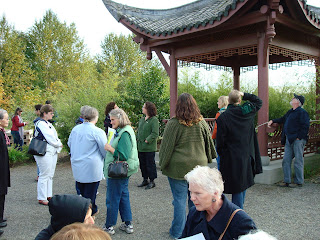 Jessie, Alanna and Cora in the (unfinished) "Knowing the Spring Courtyard": 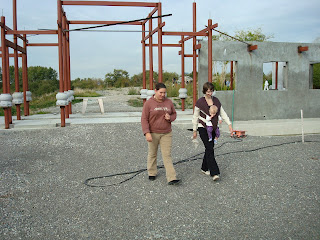 Thanks for the kind words! I always enjoy baking for your events. I just posted the recipes on my blog, vegandietitian.blogspot.com.

Hooray! I can't wait to visit the latest attraction that makes me love Seattle so much!

I'm getting really good at finding out about local events that I would have attended a couple of weeks after they have happened. I have been meaning to go to the Chinese Garden anyway, but tea would have been good bait.