A few days ago I did a comparison cupping of two sheng puer tea cakes that I purchased back in 2004 and 2005 respectively. They are from Awazon (阿佤山) and advertise "organic tea picked from high mountain wild tea trees." I purchased one tong (筒) (stack of seven) of both cakes. I sold most of them but kept a couple for aging. It's now been at least four years since I last tasted them. 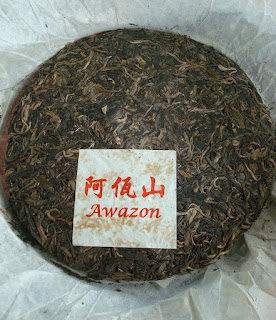 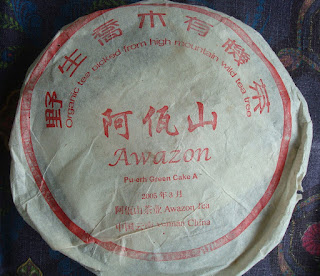 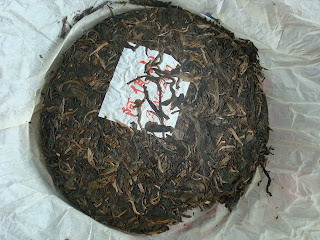 Both cakes are plainly packaged with March production dates stamped in Chinese. I'm not sure what is meant by 2004's mention of "1000 kg." Perhaps that was how much of this tea was produced? That's possible, but it seems like a lot to me. The 2005 cake looks older, but that is because it has been opened, by myself, a few more times than the 2004, and it appears that the printer was low on red ink when its wrapper was stamped.

I brewed both teas in small, identical gaiwans with ~5 grams of dry leaf each. Freshly boiled, filtered, Seattle tap water was used. I poured 5 infusions before calling it quits, though undoubtedly these leaves held more layers of nice flavor.

These teas were quite different. In my opinion, 2004 was better. Its color was a shade darker with the tiniest hint of aged flavor. It smelled sweet like damp autumn leaves (which is the only type of autumn leaves we have over here in Seattle). There was a little bitterness in several infusions (user error, I believe) but in the end it finished smooth and left a gentle ripe plum flavor in my throat.
2004 Leaves and Liquor 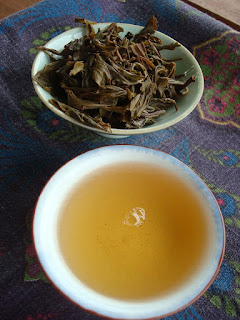 2005 drank like a decent Yunnan green tea. It was more floral and had a hint of pine and smoke in the aroma. The broth lacked depth and body but tried to make up for this deficiency with subtle grass and honey notes. It was smooth but yielded little in the way of complexity or aftertaste.
2005 Leaves and Liquor 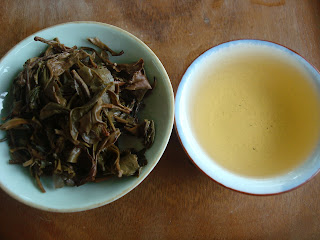 Both of these cakes struck me as "gutless" when compared to some of the higher quality sheng puer teas that I have been lucky enough to sample. These cakes are simply "OK" but because they didn't cost a lot of money, I'm perfectly happy to have them in my collection.
Posted by Brett at 7:16 AM