Back in 2006 I purchased a few pounds of Rougui oolong (肉桂烏龍) from Josh at J-Tea. This tea was made either in Taiwan, or mainland China under Taiwanese management (Josh was not certain which). The dry leaves are rolled into a ball shape instead of the long, twisted shape of many Rougui teas. I've always really loved this tea's toasty cinnamon notes and pleasant substantial mouth-feel.

In the years since, I have sold, traded, gifted and imbibed about half my stash. The remaining ~17 ounces have been resting in a plastic bag inside of an old competition Wenshan Baozhong tin in a forgotten corner of my tea cabinet.

I opened the bag on the evening of 12-4-2011 to smell it for the first time in years. The smell is nice, a tiny bit musty and sweet. I let the leaf air out for a couple hours and made a plan to roast half of it the following day. 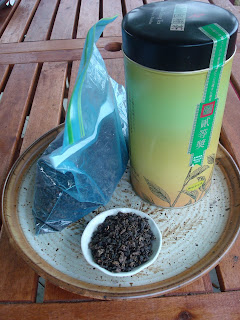 Towards the end of the hour a sweet cinnamon granola aroma started to emerge from my stove. After baking I allowed the leaf to cool completely and put it in a new plastic bag to wait until the following morning.
After First Roast 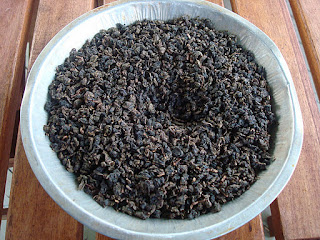 On 12/6/2011 at 7:30 AM I stirred the leaves and baked them again, this time at 215° F. I gently stirred them every 15 minutes for 2 hours. I choose these parameters based loosely on the recommendations of several tea people I emailed for advice. 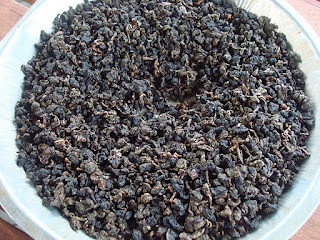 After the leaves had mostly cooled, ~10 minutes later, I set up a cupping of the unbaked and the baked leaves. I used 5 grams of tea in two identical glass cups with 6 ounces boiling water.

Unbaked on left; baked on Right. 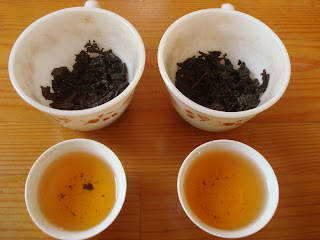 The two teas were quite different but I didn't prefer one over the other. The unbaked tea was unsurprisingly brighter and greener with more cinnamon notes on the tongue. It still tasted roasty to me and had a slightly sour taste that hinted at grapefruit and clove. The baked tea was mellow and toasty. I was happy that it didn't taste burnt or smoky but I felt that it lost some complexity going sip for sip with the unbaked tea. The baked tea was smoother and more warming with muted cinnamon and whole wheat bread crust notes.

Both teas are great and I feel lucky that I didn't ruin the baked tea. Now that I've finished the experiment I do not feel like the tea really needed to be roasted again at this time. Perhaps the careful airtight storage at my house and the original roast back in 2006 made this experiment redundant. I think I will cup these two together again in a few months to see how they're coming along.
Posted by Brett at 7:51 AM

Hi Brett.
Sorry,I can not wright English.
I think to be a long time to roast Brett.
Today,I roast sencha of 5 tea spoon with Houroku roaster.
I roast leaves for only requirement.
The Houroku roaster's size is about 10×20cm.
I am using an old tea leaves to do roast lightly.

I really like posts like this one. I like that you're experimenting with roasting, and I also find them valuable because if I ever find myself wanting to re-roast an aged oolong, I can have some reference points for how others are doing it, and what kinds of results they produce.

I have tried roasting a few teas and I've found that it's tricky to do well. I have yet to produce good results with any tea!