Last week, my coworker Elliot and I conducted an "Infuser Basket vs Tea Bag Experiment" while working at the Teacup (a retail tea shop and cafe here in Seattle).

The three products we tested were: a medium Finum brand brewing basket, a Finum brand paper tea sack and a (sadly not compostable) polyester tea bag from Japan.
The Packaging 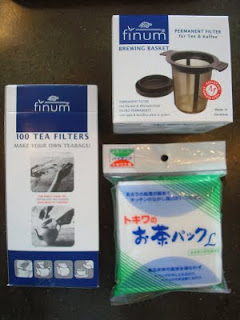 The experiment was conducted in three rounds with the exact same weight of leaf, water temperature, steeping time and cups used each time. Round #1 was Dragon Well green tea, #2 was Darjeeling black tea, and #3 was Kukicha green tea. I choose these three teas because I drink them often and thus already know them quite well.
Round #1 - Set Up 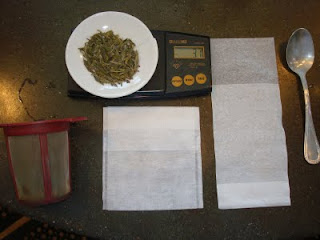 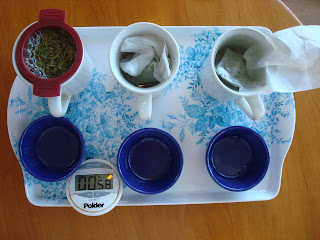 During the first round (the Dragon Well) I knew before I started sipping which cup had been used for each brewing method. The next two rounds, on the other hand, Elliot poured the liquor into new cups while I wasn't looking, so that I was cupping them "blind."

The results of the Dragon Well round were as follows: The Finum basket yielded the nicest, nuttiest flavor with the most color, depth and complexity. The Finum paper tea bag was pleasant, a bit lighter than the basket and had a slight dusty note. The Japanese tea bag tasted like garbage compared to the other two. It was too weak with a very faint unpleasant "envelope glue-like" aftertaste.

The results of the Darjeeling round were as follows (keep in mind that this time I didn't know which of the three methods was used until after I'd formed my opinions): The Finum basket had the nicest, richest, cleanest flavor. The Finum paper tea bag fell flat with and odd sort of "filmy" texture in my mouth. The Japanese tea bag actually tasted fine. It just tasted a little weak.

The results for round #3, the Kukicha, were pretty much the same as with the Dragon Well. Even though I didn't know which method was used to brew each cup, I right away guessed the basket because it yielded the greenest color (the other two looked more yellow). Elliot and I thought the basket tasted twice as good as the others and I even picked up a tiny hint of that "unpleasant envelope glue flavor" from the Japanese tea bag cup.

These results were in line with my past experiences but it was still a great exercise to test them with all the variables controlled.
Posted by Brett at 6:18 AM

Email ThisBlogThis!Share to TwitterShare to FacebookShare to Pinterest
Labels: cupping, experiments, teacup, versus

This is a really interesting experiment.

A finum basket infuser is my infuser of choice. I have found relatively little difference between brewing using one of these infusers, and brewing in a strictly ceramic vessel with either no infuser or a ceramic-only infuser.

On the other hand, I've detected a big difference when using any other type of tea infuser: I own two tea balls but I find both of them affect the taste of tea, diminishing its complexity somewhat and adding some sort of "off" characteristics.

I've used the finum paper filters before and I find they work better with some types of teas than others, and they work best if you don't overfill them. I think they're a good option, but not optimal. I recommend them if people ask for a "fill-your-own" tea-bag-like paper filter.

interesting post! I haven't tried the infuser basket you mention. My only hesitation would be the plastic- do you happen to know if it is BPA free? It doesn't sound like it imparts any plastic taste to the tea, but still it would make me a little wary.

I've been using a finum basket for quite a while now, and find it works very well for most of the teas I brew. In the past I've also used other baskets, but always go back to the finum.

I really enjoyed reading about this experiment. Thanks!

Yes, Tea Happiness, the Finum basket is BPA free. But I understand and share your hesitations about plastic. 9 times out of 10 I'll just put tea leaves directly in my teapot, cup or gaiwan but I still sometimes like to have the option of a brewing basket and/or teabags when I'm on the go.

Im liking the post, but on the topic of teaware, i was sort of wondering if you could point me to a reliable teapot purveyor (preferably online) who carries good yixing teapots.