In June of 2009, my wife, daughter and I took a little trip down to California to celebrate the wedding of our good friends Janice and Mo (affectionately nicknamed J-Mo around our household). Their wedding was truly beautiful and we were so honored to be included in the ceremony.
Well before the wedding, Janice and Mo asked me if I'd like to serve tea for their friends and family at the rehearsal dinner. I had served tea for similar sized groups before (40-ish people) but it was always around Seattle and with my own equipment. It felt so good to be asked but for some reason I was really nervous about it. I agreed, and then I put it out of my mind for a while until the wedding drew near.

Traveling with a one-year-old meant that we already had a ton of important stuff to bring. I didn't want to pack too much tea or teaware so I only brought a couple little tins of tea. I chose a nice fresh Alishan High Mountain Oolong to serve at the rehearsal dinner.

The dinner was originally set to take place at Janice's parents' home but was moved last minute to Berkeley's Sushi Solano restaurant. The restaurant had a cool vibe and the menu was a mix of house-made Japanese delicacies and take-out from the amazing Udupi Palace vegetarian Indian food restaurant.

As the guests started to arrive, the scene became festively chaotic and the strong smells of delicious food filled the room. Up until now I hadn't even started to think about just how I was going to make enough tea, serve it to the guests and have it be worthy of my friends and their guests. I started getting cold feet and even thought about backing out. I started making lame excuses in my mind such as "the tables were not arranged well for a tea service" and "the strong foods will eclipse my delicate tea selection."

The guests have arrive. 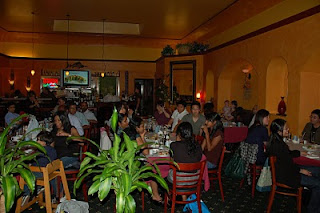 Fortunately, my wife and a few other friends helped me to come to my senses. Also, the restaurant, who until recently only had large teacups, had just found a bunch of new small sake cups with my tea pouring in mind! That sealed the deal. I couldn't let down my friends. I was going to do this!

Sushi Solano loaned me their four largest teapots (two were ceramic and two were iron) and they had a couple of electric kettles at my disposal. After the feast, I was introduced to the guests and then I talked a minute about myself, the tea I had brought and my relationship to the bride and groom.

A friend and groomsman named Sandhi came to my aid. He was an experienced server and, with the help of a few other volunteers, fragrant Alishan began to make its way to the hands of excited guests!
Readying the cups. 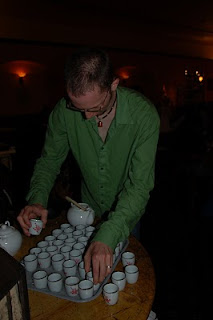 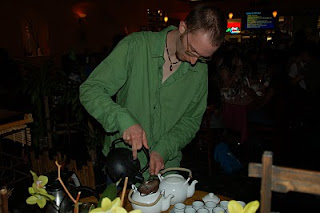 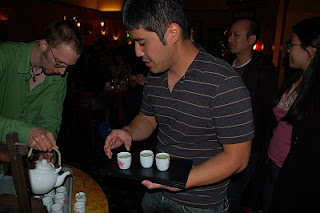 Together, everyone sipped their tea. To my great relief it turned out fine! I relaxed a little and steeped the tea several more times. I was happy to hear some good reviews of its flavor.

I led the guests in a short "tea toast" to our beloved Janice and Mo. Everybody shared the same great feeling knowing that these two fantastic people were about to get married.

The soon to be newlyweds! 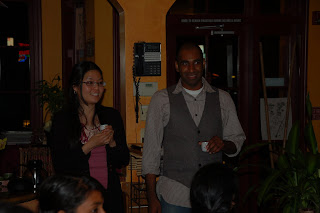 This post is my contribution to the February 2011 Tea Blog Carnival as presented by the Association of Tea Bloggers. Our theme for this carnival was "What is the most uncomfortable place where you prepared tea and how were you able to overcome the difficulty?" This month's carnival was hosted by the always fabulous Gongfu Girl and links to other participating posts can be found here.
Posted by Brett at 12:06 AM